For more than a month now, Fox News has been engaging in a smear campaign directed at Media Matters. The obvious takeaway from their obsession is that Media Matters Has Fox News Scared And Desperate. Why else would they devote so much air time and web space to falsely disparaging them? 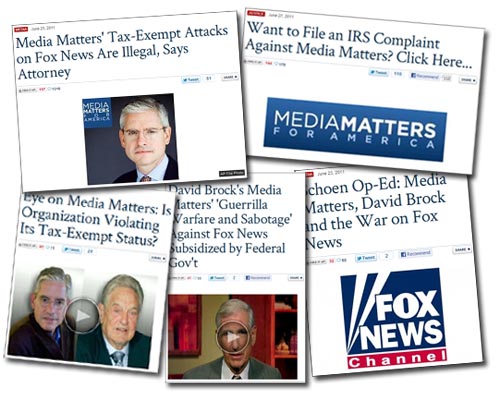 The latest episode involves a posting on Fox Nation with the headline: Media Matters’ Salaries Exposed. The post links to an article on Mediaite which references data from the Poynter Institute. Both of those sources used the headline: What it pays to monitor the media. The data includes salary information of five principles at Media Matters. However, it also includes salary information of five principles at the conservative Media Research Center.

What they left out was the data from the Media Research Center. So in the spirit of fairness and balance, here is that data:

What’s more, the Media Research Center, with an annual budget of $11 million, receives far more funding, mostly from from radical right-wing sources affiliated with the John Birch Society, the Koch brothers, and the Scaife family foundations. Media Matters has a more modest budget of $2.7 million and funding from reputable patrons like cable executive, Leo Hindery and Esprit founder, Susie Tompkins Buell. In addition, they just received their first donation from the conservative’s favorite bogeyman, George Soros, despite claims from Beckian conspiracy theorists that Soros has been pulling the strings from the beginning.

This is another example of Fox distorting the information they present because the truth would only make them look bad. It’s a pathetic exercise that reveals just how unethical and dishonest they are. Sadly, their audience just keeps getting misinformed, which means they just keep getting dumber. It makes it difficult to maintain a democracy when a major so-called news enterprise simply doesn’t care about the truth.