With the ongoing success of the Occupy Movement, Fox News is exhibiting their desperation and fear. They know that the American people are waking up and recognizing the dishonesty and corruption of the conservative media, big corporations, and kept politicians. That’s why they are resorting to tactics like this nonsense aimed at George Soros: 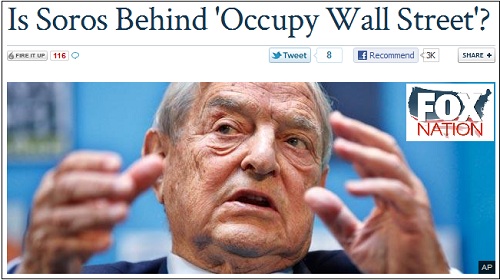 The Fox Nationalists featured this article with the headline, “Is Soros Behind ‘Occupy Wall Street?'” It’s a question they never get around to answering. That’s because they aren’t really interested in the answer, they only want to plant the suggestion. The Reuters article they link to doesn’t provide any further evidence of a Soros connection to the Wall Street protests. However, it does contain a direct denial of any affiliation. So the Fox Nation inquiry is simply a thinly veiled lie.

This transparent attempt to falsely link their favorite liberal billionaire to a grassroots movement on behalf of poor and middle class citizens is notable in that Fox has never bothered to reveal the actual moneyed interests who bankroll the Tea Party. The Koch brothers, Americans for Prosperity, and Dick Armey’s FreedomWorks have spent millions on shiny, custom painted buses they send around to the country to AstroTurf rallies featuring conservative celebrities like Sarah Palin and Sean Hannity. If Soros were indeed financing the occupation of Wall Street, what was he spending his money on? Cardboard and Marks-A-Lots?

Soros is one of a growing number Patriotic Millionaires who have the integrity to want to see the country recover economically, and to be a part of that recovery. He is proof that the Occupy Movement is not against success, it is just against corruption, greed, and unfair practices.