For this installment of my Fox Nation vs. Reality series, the Fox Nationalists have generously helped to illustrate how distanced they are from the real world that the rest of us inhabit. 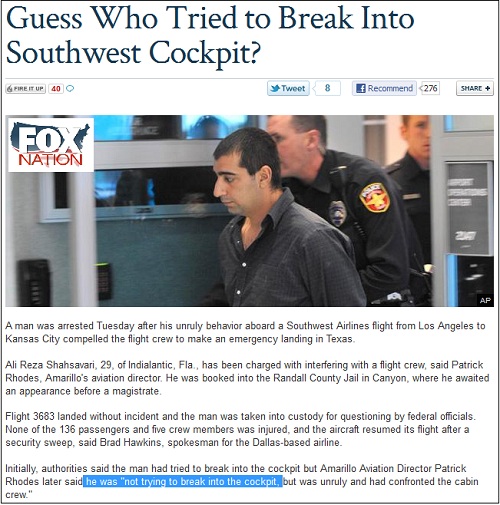 Notice that the headline Fox uses explicitly describes someone trying “to Break Into Southwest Cockpit.” But read a little further down and you’ll see that the article unambiguously contradicts the headline. The headline was wholly the creation of Fox News. Fox Nation links to an article on FoxNews.com with a similar headline that says “Southwest Flight Lands After Cockpit Break-in Try” However, that article is attributed to the Associated Press who got the headline right: “Southwest flight makes emergency landing in Texas.”

So what we have here is Fox deliberately falsifying the headline in order to make a derogatory insinuation about a man of Iranian descent who just happens to be an American citizen born in Mississippi. The article states that there is no indication of terrorism and additional reporting describe the incident as an episode of mental illness triggered by an argument with another passenger.

Fox’s attempt to incite a racist response from their addled-brained audience was abundantly successful. The vast majority of the comments below the article address the story in the context of the headline as if they didn’t even read the excerpt that Fox published. Which, of course, they didn’t. Here are a couple of examples:

That’s the response that the Fox Nationalists advocate for a non-terrorist American citizen who was emotionally disturbed (and perhaps provoked) and had harmed no one. And it’s exactly the response that Fox intended to produce when they composed their fictional headline.

One thought on “Fox Nation vs. Reality: On Imaginary Terrorist”