You would think that one thing Fox News would regard as exempt from their routine campaign of smears and lies is motherhood. You would be wrong.

On Fox & Friends this weekend (video below), the curvy couch potatoes played a video of Stacey Hessler, a mother of four from Florida who is participating in the Occupy Wall Street protest. Co-host Clayton Morris declared that Hessler had abandoned her children, a lie that was repeated on screen with a graphic that said “Mom Abandons Family to Join Occupy Wall Street.” 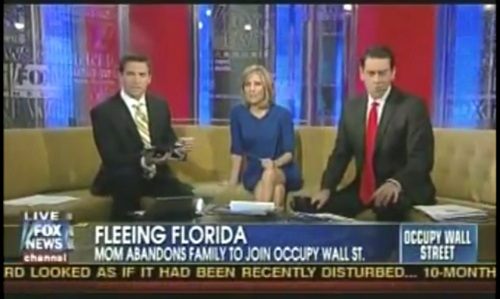 The truth is that Hessler made a principled decision with the support of her family to take action on a matter of great importance to her family and the nation. She did not abandon her family. They agreed with her desire to take a stand and assured her that they would take up the slack in her absence, along with sympathetic neighbors and friends. Fox could have simply reported that Hessler traveled to New York while her family remained in Florida, but to repeatedly use the loaded term “abandoned” is an obvious attempt to smear Hessler and deceive viewers.

But the abuse didn’t stop there. The on-screen graphic changed intermittently to say ‘From Mom To Mob.’” Morris made a repulsive, and utterly false, insinuation that Hessler was “living with a waiter” while in New York. Co-host Alisyn Camerota, in her role as an unqualified TV psychoanalyst, said that Hessler was “having a mid-life crisis,” and that she may be subconsciously protesting her husband who happens to be banker (and supports the movement). And co-host Dave Briggs was furious about a statement that Hessler made that he read on-air:

Hessler: “Military people leave their families all the time, so why should I feel bad? I’m fighting for a better world.”

Briggs complained about Hessler “equating what she’s doing with military service.” He charged that that was “more disgusting than any of the filth down there on Wall Street.” What Briggs fails to grasp is that there is more than one way to fight for your country. And there is more than one enemy. The damage to our nation caused by Wall Street is unprecedented. It is precisely the sort of damage intended by Al Qaeda when they selected the World Trade Center as a target. The difference is that Wall Street’s assault was far more harmful on a financial basis. Al Qaeda was probably ecstatic as they watched what our financial elite had done to this country.

The Fox gang went on to discuss an Associated Press poll that showed that 37% of Americans viewed the Occupy movement favorably. Instead of recognizing that more than a third of the country was supportive, a remarkable statistic considering that the movement is only a month old, they chose to focus on the 56% who had an unfavorable opinion. What they never addressed at all was that the same poll showed that the Tea Party fared much worse with only 28% viewing it favorably and 68% unfavorably, and that’s after two years. Another poll by CNN reports that 32% view the Occupiers favorably and only 29% unfavorably. Further noting that…

The American people are smarter than Fox News thinks they are. And all of the propaganda and smears has not helped Fox to undermine the will of the people. Nevertheless, Fox will continue to engage in the malicious fraud they call “news.” But their desperation is becoming ever more apparent as they sink to maligning patriotic mothers fighting for a better life for their children.

[Update:] Another new poll by the Pew Center for the People and the Press shows support for the Occupiers (39%) greater than opposition (35%). However the Tea Party is more opposed (44%) than supported (32%). Even independents are positive about the Occupiers (43% for/35% opposed), while they shun the Tea Partiers (49% opposed/30% for).