For today’s episode of Fox Nation vs. Reality, we’ve got a twofer. 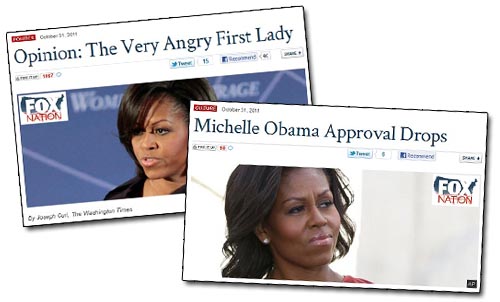 The Fox Nationalists are reviving an old and insipid insult directed at First Lady Michelle Obama. Right-wingers are obsessed with portraying her as angry, but the op-ed to which Fox Nation links goes even further. Joseph Curl, for the Moonie Washington Times, blasts Obama for being…

“…ready to spew her bilious disgust with America on the campaign trail. A dignified, transcendent first lady? No chance. Michelle is going to break with a hundred years of tradition and play the role of attack dog, heaping derision on her husband’s political opponents like no other first lady before her.”

Seriously, where do they get this stuff? Curl expects us to believe that he is clairvoyant and can predict what Obama will do in the future. And just by chance, everything he predicts casts her as rabidly un-American.

The other Fox Nation anti-Michelle article bears the headline, “Michelle Obama Approval Drops.” Technically, Fox got this one right. The Hill reports that the results of a new Marist poll show Michelle Obama’s approval rating collapsing from 65% in September to 63% now.

Call in the undertaker, it’s all over folks. Obama’s approval suffers a steep decline that is less than the poll’s margin of error. Although her approval still far exceeds her husband, Congress, Republican candidates, the media, and probably ice cream. But Fox Nation selects a headline that is so hysterically twisted that the writers at the Onion are getting nervous.

What is it that Fox is afraid of? The First Lady is a strong, intelligent, accomplished woman, who is popular with fellow Americans. So obviously Fox has to try to turn her into an acerbic witch whom every hates. It is the same tactic they have used with some success to tarnish the President with phony slurs alleging that he is a Kenyan, Marxist, Muslim who wants to destroy the country and re-crucify Jesus.

But as troubling as it is to hear these ridiculous and childish assaults, what is truly pathetic is that Fox has so many viewers and readers who actually buy into it. Sadly, in the 21st century, there is still no shortage of idiocy.