The Occupy Wall Street movement is a bona fide phenomenon that, in two short months, has grown to levels no one could have predicted. And despite the inability of the media to discern the goals of the OWS protesters, their agenda could not be more apparent. The movement’s core convictions revolve around the abuse and corruption of politics by the wealthy and corporations, and the economic inequities that have virtually vaporized America’s middle class.

These issues have unprecedented support from a broad swath of the American people. More than 70% support raising taxes on the rich. More than 70% oppose cutting Social Security and Medicare. And both of those include majorities of Republicans and Independents. Even a majority of our nation’s millionaires support these positions. Support for these principles is so universal that the only rebuttal opponents can muster are juvenile comments about socialism or hygiene.

For these reasons, perhaps it should not be surprising that Sarah Palin has jumped on the bandwagon. Her star has been fading rapidly since she stopped pretending to be a candidate for president. And while the press used to chase after her tour bus like whimpering puppies, the only attention she gets today is from her most devoted disciples and her boss, Rupert Murdoch, and the entities he controls such as Fox News and the Wall Street Journal.

It is in the pages of the latter that Palin has published a critique of the political-financial complex that is driving the nation to ruin. Her title for the op-ed is “How Congress Occupied Wall Street.” Many of her laments mirror the philosophy of the Occupy movement. While there is some obvious hypocrisy embedded in some of her remarks, it is still notable that these perspectives are being expressed by someone like Palin and published by an enterprise like the Wall Street Journal. Following are ten points that were extracted from Palin’s article that inadvertently endorse the principles of Occupy Wall Street.

1) How do politicians who arrive in Washington, D.C. as men and women of modest means leave as millionaires?
Good question. Do you suppose it has something to do with the unholy relationships between members of Congress and their wealthy benefactors? If anyone can answer this question it’s Palin, who has personal knowledge of how to earn millions by exploiting political opportunity.

2) The corruption [is] an entire system of public servants feathering their own nests.
Indeed. Although it may be a stretch to refer to a political Mafia who shakedown constituents and accept bribes from special interests as public “servants.” And once again, Palin’s personal experience with nest feathering is invaluable.

3) The moment you threaten to strip politicians of their legal graft, they’ll moan that they can’t govern effectively without it.
What politicians refer to as contributions and earmarks are what citizens regard as graft. And while the politicians make a lot of noise about cleaning up Washington, they have no genuine interest in doing so.

4) [T]heir idea of reform is to limit the right of “We the people” to exercise our freedom of speech in the political process.
It is unclear what Palin is referring to here because she has not exactly been forced into silence, much to America’s dismay. But 26 journalists covering OWS have been arrested so far. What’s more, the GOP is working at the state level to suppress voting for millions of citizens, primarily seniors, students, and minorities.

5) [T]he only solution to entrenched corruption is sudden and relentless reform.
Could Palin have come up with a phrase that better describes OWS? When protesters occupied Zuccotti Park in Lower Manhattan it was a spontaneous response to an untenable situation. And the fact that they planted themselves in the park, and other sites across the country, demonstrates just how relentless this movement intends to be.

6) We need reform that provides real transparency.
Welcome to the club, Sarah. Progressives have been arguing for more openness by government and public agencies for years. And a major component of the OWS agenda is the reversal of the Citizens United decision by the Supreme Court that permits corporations and others to bankroll political initiatives without revealing their identity.

7) We need equality under the law.
Absolutely! Equality and fairness and a sense of shared sacrifice. It is time for the wealthy, who have benefited more from their position of privilege than anyone else, to be treated equally under the law. No more special treatment. Palin should give this more than lip service.

8) No more sweetheart land deals with campaign contributors.
This is just another method of funneling bribes into the pockets of politicians and it must stop. Including the land deals where politicians advocate on behalf of contributors to get oil leases in protected wild spaces in Alaska.

9) [N]o transitioning into a lobbying career after leaving office. No more revolving door, ever.
Here is another plank of the progressive platform that has been beaten down by entrenched politicos every time it was proposed.

10) This call for real reform must transcend political parties. The grass-roots movements of the right and the left should embrace this.
Amen!

Now, is Sarah Palin actually getting behind Occupy Wall Street? Of course not. She undoubtedly considers them unclean, unfocused, and un-American. But the positions she appears to advocate here could be interpreted as aligned with the goals of OWS, even if it is entirely accidental on her part. Perhaps she deliberately plagiarized the platform in a desperate attempt to steal some of its popularity for herself. There is a delicious irony in that Palin has published this piece in Murdoch’s paper. You could say that these ideas have Occupied the Wall Street Journal, albeit from a back entrance. 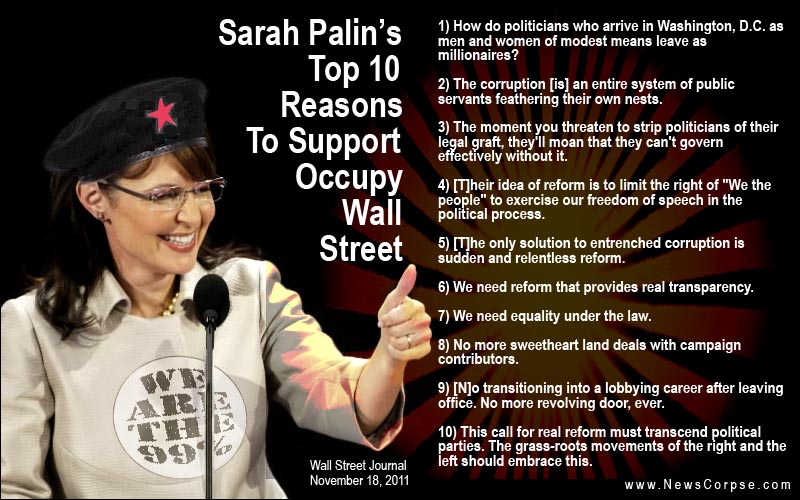