What is so hard about this? Congress is struggling to fashion a compromise agreement on a bill to raise the debt ceiling. The Republicans are insisting on attaching unrelated provisions to the bill to satisfy the tantrums of Tea Party-affiliated members who are demanding deficit reduction that imposes severe spending cuts but permits no revenue raising through tax reform and the elimination of loopholes.

The truth is that no one but a few extremist right-wingers are represented by the positions to which the GOP has lashed itself. Here’s the proof: 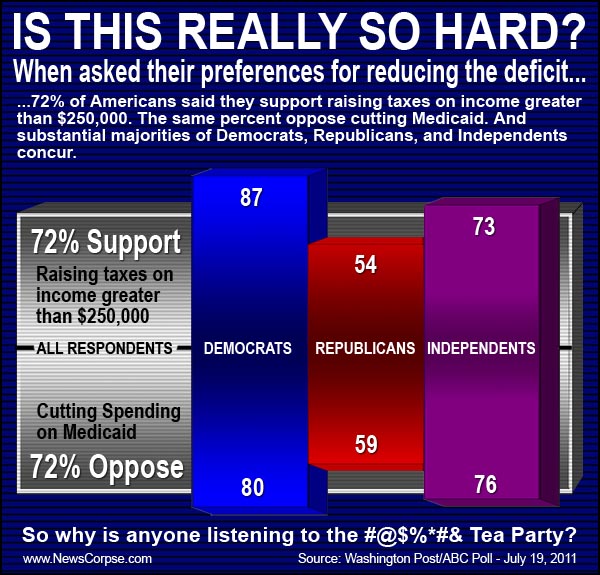 It is almost unheard of to get 72% of Americans to agree on any politically contentious issue. Yet here we have 72% of the country agreeing that the rich are not presently paying their fair share, and that Medicaid should not be cut. And isn’t just a bunch of socialist lefties. This includes majorities of both Independents and Republicans. Let the significance of that sink in. It is not just a fair number of Republicans, it is a MAJORITY of Republicans.

So for whom is House Speaker Boehner fighting? For whom is Senate Minority Leader McConnell fighting? It obviously is not their GOP constituents. In fact, they are betraying their constituents and putting the whole nation at risk in order to pacify a cabal of small-minded, short-sighted, ill-informed, intransigent malcontents known as the Tea Party.

Of course, there is really no such thing as the Tea Party. There are no Tea Party candidates; no Tea Party policies; no registered Tea Party voters. It is nothing more than a radical faction of the GOP that has canonized the Founding Fathers and debased the Constitution with simplistic misinterpretations and ritual recital.

With poll results like those above, it is unfathomable that Republicans in congress give such a wide berth to their tea-besotted cousins. And the same goes for the media. When news networks placate TeaPublicans by employing them to provide commentary and analysis for that point of view, they are, in effect, giving ultra-conservative Republicans an additional voice that they do not provide to progressive Democrats.

It is clear that the Tea Baggers are wildly out of touch with the mainstream of America and they should not be afforded the special treatment they receive. They are merely an annoyingly squeaky wheel with no popular support. They degrade the debate with their stubborn attachment to dubious dogma. Even the right-wing Wall Street Journal editorial page declared that “Republicans are not looking like adults to whom voters can entrust the government.” Actually, they aren’t even looking like children:

Regardless of how the debt ceiling debate shakes out, the media, as well as our congressional representatives, need to recognize that the Tea Party is unworthy of the outsized consideration they receive. They haven’t earned it and they don’t deserve. And catering to their hysterics is counterproductive and worse, destructive. With the abundance of evidence that they are a poorly attended party that is located far beyond the boundaries of common sense, the question remains…..