Rolling Stone just published an enlightening, albeit disturbing, article detailing the coordinated effort on the part of the Republican Party to roll back voting rights for millions of Americans. With the help of the American Legislative Exchange Council [ALEC], the billionaire Koch brothers, and other rightist allies, the GOP has already succeeded in passing legislation that inhibits and/or prohibits voting by students, seniors, minorities, and the poor. 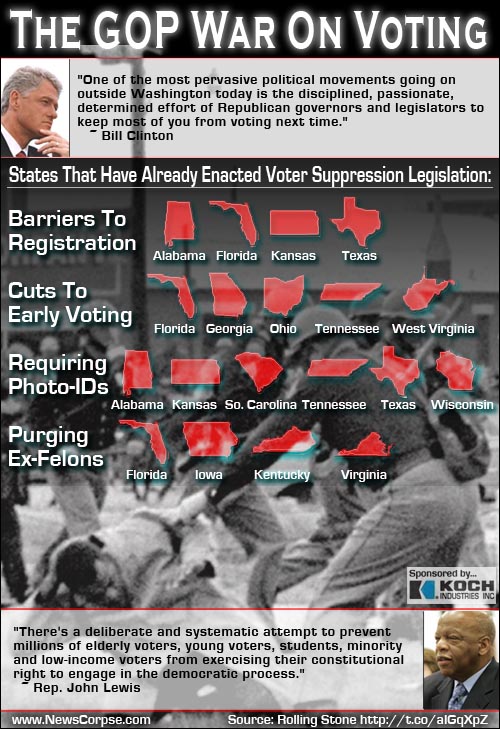 The article goes into great depth describing the GOP assault on democracy and the potential for disenfranchisement and electoral chaos. Some groups, including the ACLU, are challenging the new laws in court. But if these laws can’t be overturned in time for 2012, citizens will need to more aggressively pursue registration and get-out-the-vote campaigns than ever before.

The movement to Block the Vote has become such a critical part of the Republican agenda that they are casting aside the pretense of voter fraud as a justification for their efforts. They were never able to provide evidence of that anyway. Now, Matthew Vadum, a conservative columnist associated with WorldNetDaily, American Spectator, and BigGovernment, wrote an article for the ultra-conservative American Thinker provocatively titled, “Registering the Poor to Vote is Un-American.” Here’s an excerpt:

“Registering [the poor] to vote is like handing out burglary tools to criminals. It is profoundly antisocial and un-American to empower the nonproductive segments of the population to destroy the country — which is precisely why Barack Obama zealously supports registering welfare recipients to vote. […] Encouraging those who burden society to participate in elections isn’t about helping the poor. It’s about helping the poor to help themselves to others’ money.”

When the right is this comfortable openly expressing their hostility toward both democracy and working-class Americans, either the wheels are about to come off that wagon, or we have an epic battle on our hands. It’s all out in the open now. The conservative view is one that would permit only landowners (and preferably just the male, white ones) to vote. Any American that does not represent the elite class is somehow invested in the nation’s ruin and is only concerned with narrow, self-interests. And of course, the rich are never so selfish. They never vote for their own interests. All they want is what’s best for everyone, even the little people who shouldn’t be allowed to vote. Whatever would we do without these benevolent guardians of virtue watching over us and voting on our behalf? And if you think it’s just wackos like Vadum saying these things…..

John Stossel (Fox News): “Let’s stop saying everyone should vote.”
Rush Limbaugh: “If people cannot even feed and clothe themselves, should they be allowed to vote?”
Judson Phillips (Tea Party Nation): “If you’re not a property owner, I’m sorry, but property owners have a little bit more of a vested stake in the community than not property owners do.”
Steve Doocy (Fox News): “With 47% of Americans not paying taxes – 47% – should those who don’t pay be allowed to vote?”

Whatever we do, we cannot permit this cynical agenda to succeed. This is a fight that will determine the outcome of every other fight we undertake. It is imperative that real patriots commit themselves to ensuring that everyone who wants to vote has an opportunity to do so. The more people who participate in the electoral process, the more representative our political institutions will be. And it’s about time that they represent the people and not corporations and wealthy special interests.

[This Just In] Sen. Dick Durbin will hold a hearing September 8, on the “New State Voting Laws – Barriers to the Ballot?”

Some additional resources:
ThinkProgress
People for the American Way

And then there’s this: