Fox News Sunday hosted Liz Cheney to discuss the economy and Barack Obama’s role in deliberately sabotaging it. The conversation descended into a surprisingly moronic set of conspiracy theories that would make Glenn Beck’s doughy chest heave with pride. And of course, it was a discourse that utterly abandoned known facts.

Wallace asked Cheney whether it was a problem for Republicans that they are portrayed as “fighting for the Bush tax cuts for the wealthy but willing to let the payroll tax cuts for the middle class disappear.” Cheney evaded that question entirely in order to serve up an inane conjecture that defies coherent logic:

Cheney: The President basically seems to have made the calculation that he’s gonna let the next thirteen months of the American economy slide for the sake of his own political benefits.

The reason Cheney evaded the question is because she knows that overwhelming majorities of the American people support letting Bush’s tax cuts for the wealthy expire, and they also support the extension of the payroll tax cut. So she was forced to resort to inventing a distraction to defend the GOP’s indefensible agenda.

However, with her back up against the wall, Cheney latched onto an absurd assertion that President Obama wants the economy to suffer in order to enhance his reelection prospects. She apparently subscribes to the theory that poor economies are the best way to boost political campaigns. That’s a theory that only makes sense to a party that takes candidates like Donald Trump, Michele Bachmann, Herman Cain, Rick Perry, and Newt Gingrich seriously. It exposes a level of ignorance that is mind boggling.

In addition to the delusional nature of Cheney’s political analysis, she is also factually miles from reality. The pretext for her comment was her assertion that Obama has done nothing to address problems associated with unemployment and the deficit. She alleged that Obama had not engaged the Super Committee to assist in shaping a compromise. However, there was a White House proposal before the Super Committee had even convened its first meeting. That proposal offered a four trillion dollar reduction in debt achieved through both new revenues and entitlement cuts.

As for employment, Obama has already implemented initiatives to spur hiring of new employees in the form of credits for hiring the long-term unemployed and veterans. He has proposed restoring the nation’s infrastructure which would not only improve the environment for commerce, but would employ thousands. Republicans opposed those initiatives, as well as every other plan to help American families recover from the GOP-made catastrophe.

All sane observers know that delaying economic recovery would be the worst thing that could happen for Obama’s reelection campaign. In fact, the only beneficiary of a bad economy is the Republican Party and they have been openly hostile to any method of healing the country’s economic woes. Representative of their point of view is this image of an anti-recovery conservative who would rather hurt his neighbors and his country than to see Obama get credit for improving the economy. A real patriot would be hiring now in order to get the nation back on solid footing. But that is not how Republicans think.

Almost from inauguration day, the GOP has sought to kneecap the administration by opposing its policies and personnel. They have engaged in a record number of filibusters and created a degree of partisanship that is unprecedented. They have even opposed their own proposals after they were endorsed by Obama. It is an intentional tactic aimed at producing a national crisis, both economically and politically, to alienate voters and drive a wedge between different factions of the American people. It is a cynical and destructive crusade of division that has been exacerbated by a media that feasts on controversy and discord. Ted Koppel put it well in a recent article in Broadcasting & Cable: 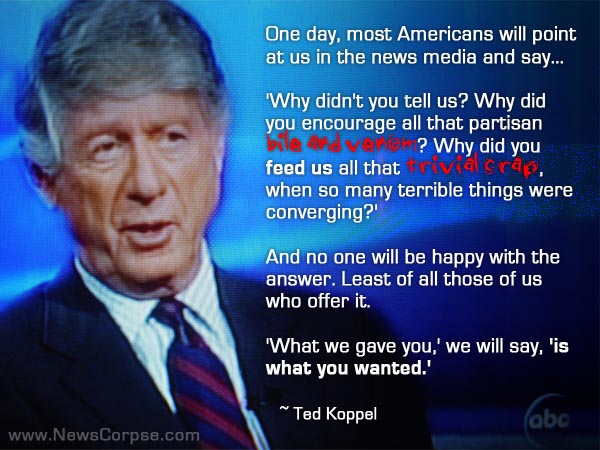 “One day, most Americans will point at us in the news media and say, ‘Why didn’t you tell us? Why did you encourage all that partisan bile and venom? Why did you feed us all that trivial crap, when so many terrible things were converging?’ And no one will be happy with the answer. Least of all those of us who offer it. ‘What we gave you,’ we will say, ‘is what you wanted.'”

Sad, but true. And while Koppel gets some credit for saying it now, you have to wonder where he was when Bill Clinton was being impeached over a sex scandal; when Fox News launched as “fair and balanced”; when George W. Bush invaded Iraq and portrayed his opponents as traitors; when candidate Obama was accused of “pallin’ around with terrorists”; and when the Koch brothers financed the deliberately divisive Tea Party.

The media’s exploitation of melodrama and the Republican’s embrace of willful ignorance have united to create one of the most unstable eras of American history. It’s going to take a concerted effort to undo the damage, but it is not too late if conscientious citizens demand more of both the media and Washington.