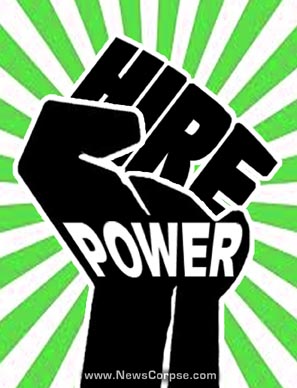 America is at a crossroads on this Labor Day. We can sit back and wait for greedy, impersonal corporations, or politicians with conflicts of interest and hyper-partisanship, to come to the rescue of middle and low-income citizens, or we can submit to a Hire Power!

About two and half years ago the United States hit a boulder in the economic road. Venerable money center banks were crushed under the weight of spurious investments and barely legal schemes. There was a broad consensus that absent some dramatic response there would be a catastrophic failure of the nation’s financial foundations which, of course, would spread throughout the world.

The markets panicked, plummeting 5,000 points (45%) from September 2008 to March 2009. Home foreclosures skyrocketed and the unemployment rate rose from 6.2% to 8.6%. In the meantime, Washington scrambled to legislate bailouts and stimuli for banks, insurance companies, and auto manufacturers, somehow neglecting to provide aid to millions of middle and low-income victims of this banking-driven disaster.

Today the Dow Jones average is back above 11,000, about where it was in September 2008, and nearly double its low. Investment firms like Goldman Sachs have fared well also. Goldman’s stock today is 150% above where it had bottomed out. Automakers like GM and Chrysler are once again profitable and paying back their government loans. And the unemployment rate has … well … it’s gotten even worse, rising to 9.1%.

So by almost every measure the economic recovery has been swift and robust with one exception: Jobs. The nation is experiencing what analysts call a “jobless” recovery. The companies that have been enjoying renewed success thanks to consumer support are still hesitant about hiring. They are hoarding their resources to either avoid new risk or to reward themselves with higher salaries and bonuses.

It’s clear that the American people cannot rely on big business to address the jobs deficit that is still burdening so many families. It’s time to take matters into our own hands. Small businesses have the power to effect a massive change in the current economic environment. Some estimates show that more than 70% of new jobs are created by small businesses. It is within that market that ordinary citizens can bypass the greedy and insensitive corporations who are only interested in enriching themselves at the expense of the rest of us. They have already demonstrated that they couldn’t care less about American workers by their refusal to create new jobs, or when they do create jobs, it’s for workers in other countries.

So what can we do about It? We can promote the creation of new jobs by small business in our own communities. If small businesses with fewer than 100 employees were to commit to hiring one person – just one person – the effect on the community could be significant. Take Rhode Island, for example. The state has about 6,200 businesses with between 10 and 100 employees. If each one of them hired a single new employee, that would be 6,200 Rhode Islanders with a job that previously did not have one. It would reduce unemployment in the state by one percent. It would mean that 6,200 fewer people would be receiving unemployment benefits and other government aid. 6,200 more people would be contributing to, rather than draining, public resources.

More importantly, it would mean an additional 6,200 people would have income with which to patronize other businesses in the community. Restaurants, dry cleaners, book stores, etc., would prosper. Suppliers and manufacturers who service those businesses would see increased demand. And all of those businesses would then be able to explore hiring more people as well, continuing the cycle of prosperity.

Make no mistake about it. The right-wing myth of trickle-down economics is a proven failure. For ten years corporations have enjoyed the supposedly temporary tax cuts implemented under the Bush administration, but they have not been creating jobs. The reason is simple. Companies do not create jobs for the heck of it. Lowering their taxes or repealing regulations will not produce a single new job. After all, why would a company hire people to make more of something that they aren’t selling just because their taxes went down? Companies hire people when they have increased demand for their products or services. Increased demand occurs when consumers are buying things. So when people have good paying jobs and money in their pockets they will make purchases which will spur companies to meet the new demand by hiring more workers.

But maybe there is a way to prime the jobs pump. The goal should be to put more people to work so that they can distribute their income back into the economy. This effort may take some measure of faith on the part of the businesses who take the initial step to hire a new employee. Some businesses may not be able to fully justify a new hire. Do it anyway! The potential upside for the business and the broader economy makes it a reasonable risk. There is a sort of patriotic duty to assume such a risk on behalf of the welfare of our country. If enough of your neighbors join in, the rewards will be substantial. In the worst case scenario, you may have to let the new employee go in a few weeks or months. But at least he or she would have been employed briefly, and the cost to the business would have been negligible. It’s the sort of speculative investment that is worthwhile even if it does not guarantee a return.

On the other hand, if it does succeed, the nation’s economic health can be restored community-by-community. We can build out this program and spread it across the country. Neighbors helping neighbors. No dependence on government programs that do too little and are too difficult to implement. Medium-sized businesses can participate by hiring two or three new people. Big businesses would eventually recognize the momentum and loosen up their own purse strings to hire in even greater numbers. And the spending by all of these newly employed citizens would finance the economic rebound that everyone has been hoping for.

Does this seem too idealistic? Too fanciful and unrealistic given the harsh dimensions of our economic hardships? Let’s ask the city of Atlanta whose “Hire One Atlanta” program is already in progress and showing promising results. So far, nearly 1,500 businesses have added more than 13,000 workers. They are aiming for 150,000 jobs over the course of a year. They make a compelling argument on their web site:

“Hire one new employee and you’ll start a chain of events that can positively impact individuals and our entire economy.  According to one analyst, a single new hire can (on average) increase U.S. GDP by about $100,000. Imagine if 150,000 businesses each hired just one person.”

That’s a $15 billion boost to the economy, and that’s just in one city. Last week the city of Greensboro, North Carolina announced that they will implement a program similar to the one in Atlanta. Why not spread this across the nation and put hundreds of thousands of Americans back to work? The spike in spending, investing, and consumer confidence could be just what is needed to finally bring the economic recovery to the job market. And rather than just the top 1% of the nation’s wealthy elite enjoying the benefits of a rebound, all Americans can share in a growing and healthy economy.

The best part is that all of this can be accomplished by ordinary citizens inspired by the power unleashed in the simple act of of hiring their neighbors. So let’s get started. This is what we call Hire Power!

3 thoughts on “A Hire Power: The Local Approach To Resolving The Job Crisis Nationally”