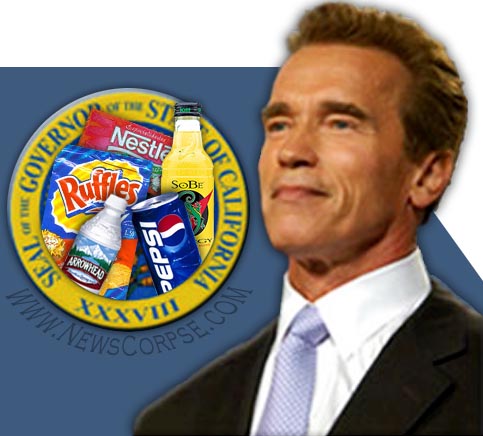 American Media Inc., owner of the National Enquirer, paid $20,000 to a woman with whom the then Governor-wannabe was carrying on an affair in order to buy her silence. The deal was executed just days after Schwarzenegger announced his candidacy. Gigi Goyette, whose name alone foreshadowed notoriety as a political harlot, entered into a confidentiality agreement with AMI that prohibited her from disclosing the affair to anyone other than AMI. AMI then pocketed the agreement and never wrote or published Gigi’s story.

Why would this gossip rag pay thousands for a juicy sex scandal and not act on it? Because AMI was also pursuing Arnold to become executive editor of Flex and Muscle and Fitness, magazines published by, you guessed it, AMI. For AMI it was inducement for Arnold to sign on, as well as a measure to protect their newest asset’s reputation and aid his election prospects, which would further boost his market value.

This is, by the way, the same AMI that was recently exposed for having entered into a secret contract with the Governor that would earn him over $13 million. Amidst blistering publicity and charges of conflict of interest, the contract was terminated, but Arnold would not return any of the funds he had already received.

As it turns out, AMI paid Arnold more than money. They effectively bought him the governorship by suppressing the kind of well-documented story that could have sunk him. Ironically, this tale of sex, scandal, and deception is exactly the sort of fare upon which the National Enquirer thrives. Nonetheless, despite the fact that they still own the exclusive, I don’t think we’ll be seeing it on their pages any time soon.