If there is anything that history teaches us about empires, it is that they are temporary and often fall of their own decaying weight. Ancient Rome is notorious for a descent that was widely speculated to have been driven by a massive class disparity. The aristocratic patricians devolved into a morass of immorality and obscene opulence. Meanwhile, the other 99% of the empire’s subjects were burdened by lives of oppressive labor or slavery.

The parallels to contemporary American class division are striking. We have our own aristocracy that arisen to a place of privilege and power, while working families are working harder for less, if they’re fortunate enough to be working at all. The 400 richest Americans control more wealth than the bottom 150 million of their fellow citizens – combined. And they exploit the power that comes with that wealth to further enrich themselves. Between 1979 and 2007, average after-tax incomes for the top 1% rose by 281%, compared to a 16% rise for the bottom 20%. The Roman elites would have felt right at home.

There is one difference, however. An historical study published by the Cambridge University Press looked at the Roman economy and calculated the measurement used by the CIA to rank the wealth gap of the nations of the world. What it found was that the United States actually ranks lower on income inequality than Ancient Rome.

Let that sink in for a moment. History’s most conspicuously ostentatious society of Bacchanalian excess had a less severe chasm between its rich and poor subjects than contemporary America. That astonishing fact led me to wonder where the U.S. stands when compared to its modern counterparts. So I consulted the CIA World Factbook and ranked the twenty richest nations by the index that represents income inequality. What I found was that the U.S. ranks 18th out of twenty. I call it The Decadence Index, and countries like Iran, Russia, and India are all less decadent than the United States in terms of economic disparity. 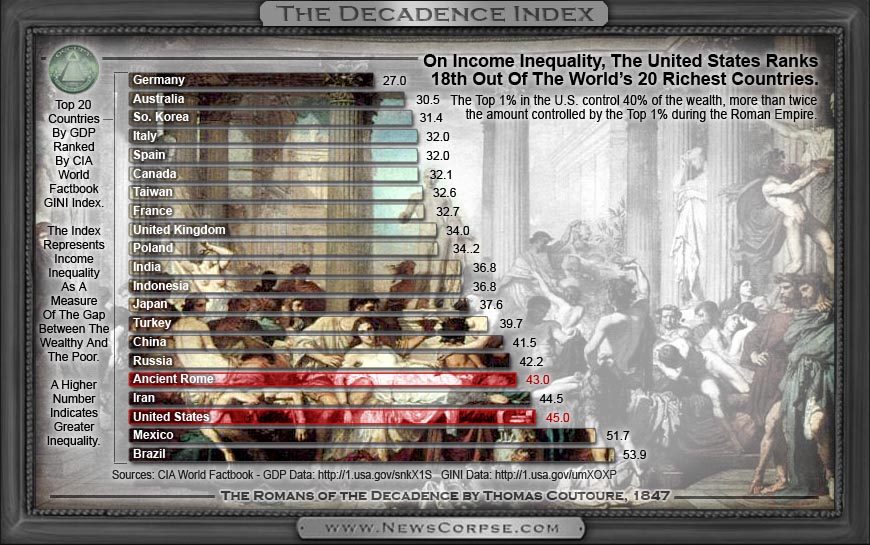 The CIA collects this sort of data because it can be useful in predicting where civil unrest might flare up in the world. So what does that say about the stability of our social structure going forward? It certainly explains the Occupy movement. The question now is what are we going to do about it?

The solutions are not all that difficult to comprehend. Those who have benefited so lavishly by exploiting the system for their own enrichment should now be required to share a fair portion of the sacrifice necessary to restore economic health and balance. It’s not rocket science. Malcolm Gladwell offers a compelling explanation as he demolishes the rightist fable that taxes on the wealthy impede economic growth:

If we want to raise our position on the Decadence Index above that of the Ancient Romans (or the Russians or the French, for that matter), we need to reject the reckless and insensitive agenda of the right-wing patricians whose sole purpose is the accumulation of wealth and power. These patrons of plutocracy unabashedly advocate cutting, even eliminating, taxes on themselves, the rich, and intensifying the tax burden on everyone else. They falsely portray themselves as “job creators,” but this InfoGraphic shows who The Real Job Creators are. They pretend to fret over a class war that they themselves are waging. And because they know that the people overwhelmingly support the principles of economic fairness and justice, these conservative elites are conspiring to suppress the votes of average Americans, particularly seniors, minorities, students, and low-income voters.

Make no mistake, this is a coordinated campaign financed and managed by shadowy, but powerful, business and political entities like the American Legislative Exchange Council (ALEC). Their mission was aided by the Supreme Court’s odious decision in the Citizens United case that opened the floodgates of corporate money into the electoral process. And, of course, they have the propaganda power of Fox News to advance their greedy, magisterial interests. But the people are fighting back against ludicrous notions like “Corporate Personhood,” and the Upper Crusters are afraid. Even Republican strategist Frank Luntz is admitting as much:

So keep up the fight because Corporations Are Not People. Here are some ways to contribute and participate:

Get up. Get involved. Get mad. And get to work.

13 thoughts on “The Decadence Index: How The Wealth Gap Is Hastening The Fall Of The American Empire”