Last week the U.S. Senate voted to condemn the New York Times for running an ad that was critical of the administration and it’s lackey, Gen. David Petraeus. The inevitable consequences of this government imposition of approved thought are already becoming manifest.

The Times itself is slamming its ad sales group for accepting the ad from MoveOn.org and offering them a rate reserved for stand-by advertisers. Public Editor Clark Hoyt enumerated the list of grievances from opponents of the ad. They include:

And what did this flurry of hard-core conservative pressure yield? Well, the so-called liberal Times caved in to the rightists and proved the effectiveness of shouting down lawful dissent. Hoyt argued that the Times violated it’s advertising policy which states that they, “do not accept opinion advertisements that are attacks of a personal nature.” But criticizing Petraeus’ intention to go before Congress and parrot the views of the White House is not a personal attack. It is a substantive expression of a viewpoint that is shared by millions of Americans. What’s more, Hoyt didn’t bother to level the same complaint against rebuttal ads by Rudy Giuliani or FreedomsWatch. Hoyt went even further in defining the lengths to which he would go to muzzle free speech saying…

“…I’d have demanded changes to eliminate ‘Betray Us,’ a particularly low blow when aimed at a soldier.”

Had Hoyt been in a position to do so, he would have forced a private advocacy group to alter the message they wished to convey. And as justification, he implies that a general, who is being used as a political prop by the White House, cannot be called to account for abandoning the American people in favor of his boss, the President. Submission accomplished, Mr. Hoyt.

Another example of the fallout from this campaign of suppression is the refusal of the New York Metro to run an ad from the anti-war group, World Can’t Wait. The Metro deemed the ad “too inflammatory” for its criticism of Bush’s thinly veiled threats against Iran. WCW has a right to be disturbed by this rejection and they succinctly explain what’s at stake for our nation’s coveted rights under the First Amendment to the Constitution:

“One of the few avenues to get the truth into the major media – buying advocacy ads – will be in effect closed down if publishers are afraid to sell space. The White House will be the strong-arm arbiter of what is acceptable in terms of political criticism.”

(Visit World Can’t Wait for more info about the ad and how to contact the Metro).

The dominoes are falling. It began with an orchestrated assault on free speech by right-wingers in response to MoveOn’s ad. Then the Senate capitulates and condemns said speech. Then newspapers, feeling the heat, reject ads by independent groups of citizens seeking to engage the public. What’s next? An Official Doctrine of Acceptable Speech? 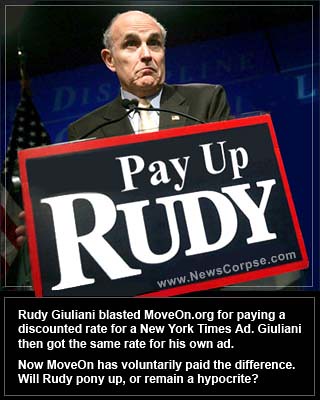 Finally, MoveOn responded to the Times’ assertion that the stand-by rate they were charged was a mistake by volunteering to pay the $77,508 difference. Will MoveOn’s critics, who so vociferously complained about the discount, acknowledge that gesture? Will Rudy Giuliani and FreedomsWatch, two of the most clamorous complainants, who themselves received an equivalent discount, pay back the difference they were afforded? If they do not, they should hear about it, and since the Conventional Media probably won’t do it, it’s up to the blogosphere, again.

Update: Lane Hudson at News For The Left has filed a complaint with the FEC against Giuliani. Good luck Lane.

Also, Giuliani is refusing to pay the difference between the stand-by rate he received and the full rate, as MoveOn did. His spokeswoman said that the ad “was placed at the standby rate with no commitment it would run on a specific date.” But she is contradicting her boss who you can listen to here for yourself.

3 thoughts on “Chilling Effects: Betraying Freedom Of The Press”