After last year’s State of the Union address by President Obama, the Tea Party produced a response delivered by Michele Bachmann, the founder of the Congressional Tea Party Caucus. Astonishingly, this irrelevant and amateurish production was broadcast live by CNN immediately following the Republican response. It was one of the most surreal and embarrassing lapses in judgment by a news network for the whole year.

This year, the Tea Party Express (TPE) has announced that they will produce a similar response featuring failed GOP presidential aspirant and serial sexual harasser, Herman Cain. There is no indication at this time whether CNN intends to carry his response. The choice of Cain leaves little to the imagination about the content of the Tea Party response. Cain has already expressed his opinion that Obama is a liar who engages in rhetorical bullshit: 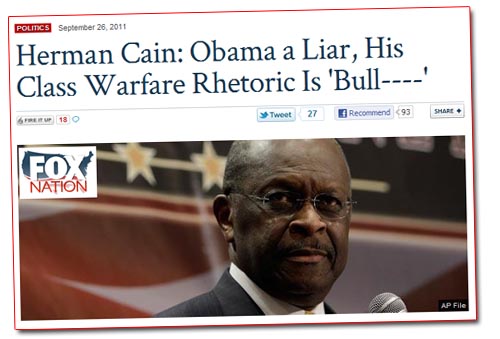 Stay classy, Herman. I couldn’t care less what, or who, a disreputable organization like TPE wants to waste their time on. They are best known for funneling the donations from their supporters into the coffers of the GOP PR firm that created the group, and they were thrown out of the Tea Party Federation due to racist remarks by their spokesman. But it would be unconscionable for CNN, or any other network, to broadcast their extremist tripe again on live television.

It is an incontestable fact the Tea Party is the far-right flank of the Republican Party and it is losing even the meager support that it managed to achieved. It does not deserve to be elevated to the status of legitimate political party by media that is only interested in generating fake controversy. Carrying the Tea Party response to the State of the Union amounts to having two Republican rebuttals to a single speech by the President.

If the media is concerned with responsible reporting they will not repeat the absurdity of last year by broadcasting the Tea Party response. However, if they do choose to proceed with such a broadcast, then they should be fair and balanced and also air a response from the other side. The Congressional Progressive Caucus (a much longer established and larger group than the Tea Party) could produce a response suitable for broadcast. Or an independent group (i.e. Common Cause, Rebuild the Dream, AFL-CIO, etc.) could put together a response. They could get Robert Reich or Al Franken or Elizabeth Warren to act as the spokesperson.

Given that the State of the Union is just a couple of days away, it is important to act quickly to ensure that a response is available to the networks. Then, if the press goes ahead with a Tea Party response they will have to provide equal time or explain their obvious bias. Anyone reading this with access to the people or organizations that could put this together is encouraged to pass the idea along ASAP. Let’s not be caught unaware again.

4 thoughts on “Will There Be Another Live Tea Party Response To The State Of The Union?”