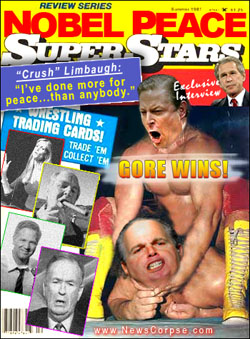 This morning the Nobel Committee awarded its Peace Prize to Al Gore and the United Nations Intergovernmental Panel on Climate Change. The announcement stirred predictable speculation as to whether this honor would spur Gore to enter the Democratic primary for president. The announcement also stirred predictable gnashing of teeth and flapping of jaws as anti-planet rightists search for footing from which to bash the honorees. I’m certain that prescriptions are being furiously written for many pundits and politicos whose blood pressure is now rising faster than the global climate.

At the head of the line is Rush Limbaugh whose drug-addled delusions have him fancying himself as a Nobel nominee:

“As you know, I’m an accredited nominee this year for the Nobel Peace Prize.”

He is, of course, no such thing. His lawyers, who are not valid nominators, submitted his name to the Committee, but that doesn’t constitute accreditation. It’s surprising that Limbaugh would even bother to offer up such a lie when he has previously denounced the award:

That display of unchecked narcissism is typical for Rush. But even while he disparages the award, he must secretly be stewing. Earlier this this year he went so far as to propose a challenge to Gore’s Nobel candidacy:

“My lawyers at the Landmark Legal Foundation are looking into the possibility of filing an objection with the Nobel committee over the unethical tampering for this award that Al Gore is engaging in.”

By the way, those are the same lawyers that “nominated” Limbaugh. I think my second favorite thing about Gore’s winning will be watching as the light cast by this award sends roaches like Limbaugh, O’Reilly, Beck, etc., scurrying for the darkness they crave. But, like those other creepy crawlers, they won’t stay hidden for long. These are the same sleazeballs that recently attacked a 12 year-old auto accident victim because he had the temerity to speak out for health care for children. These are the same scumbags that call veterans who oppose Bush’s quagmire in Iraq “phony soldiers.” These are the same slime-miesters that are shocked to find that African-Americans eat with utensils and can run restaurants.

While we celebrate this honor for Al Gore and the victory for this little planet we call home, we might want to keep our peripheral vision attuned to the inevitable assaults from the Rapture Lobby who are all to eager to see life on this Earth come to a glorious, searing, apocalyptic end.