It must be a slow day over Fox Nation. Ordinarily the Fox Nationalists are up in arms about some new socialist plot by the President or a conspiracy by George Soros to fund the Muppets’ latest effort to indoctrinate children into gay marriages. But today they have had to resort to this: WH Reporter Upset at Carney’s Continual Snubbing. 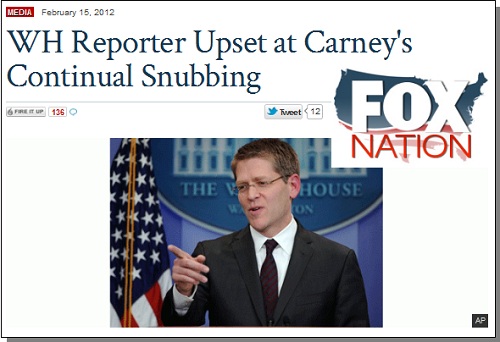 The White House reporter in question is Lester Kinsolving of WorldNetDaily, an uber-conservative blog that is still championing the cause of proving that President Obama was not born in the United States. For a brief background on the sort of questions that America is missing out on when Kinsolving is snubbed, take a look at this abridged list:

Kinsolving is universally viewed as a crackpot, and his resume bears that out. It’s amazing that he can even get press passes to attend the White House briefings. I think part of the reason is that he’s been doing it for decades and I think some of the press corps regard him as something of a mascot. If nothing else, he serves as comic relief. Reading the transcripts of the briefings, the most common parenthetical reference is the word “laughter” pretty much every time he is recognized.

Now Fox Nation has embraced this loony and taken up his cause. At the same time they are treating WorldNutDaily as if it were a credible news organization. I guess Fox and WND have something in common in that regard.