As I documented yesterday, Fox News is maniacally desperate to destroy the reputation of Media Matters before their book, The Fox Effect, is released next week. The latest evidence of their desperation: Four more articles on Fox Nation for a total of twelve in just three days.

There have also been four more segments broadcast on Fox News (two on Fox & Friends, one discussion on Happening Now with Jon Scott, and one featured on America Live with Megyn Kelly) for a total of nine in three days. This may be the most reported story on Fox News. That shows that the priority of crushing Media Matters far outweighs little things like the just-released White House budget, Iran’s nuclear program, the presidential election, or the turmoil in Syria and the Middle East. Fox can’t be bothered with any of that when there is a book coming out that is about to blow the lid off of their pseudo-news, GOP PR scam operation. And speaking of the GOP, according to Steve Doocy they have their priorities twisted as well:

“Some congressional Republicans are now looking at Media Matters tax-exempt status – that’s right, they get it – more specifically, why [Media Matters founder] David Brock’s liberal web site is allowed to use your tax dollars to attack Fox News Channel.”

It’s nice to know that Republicans in congress are working hard on the issues that matter to the American people. And, of course, none of this is coordinated. The congressional activity, the investigation by The Daily Caller (run by Fox News contributor, Tucker Carlson), the massive coverage of the story by Fox, and the imminent release of an anti-Fox book. It’s all just an incredible coincidence. It must be – Fox News said so:

A Fox News spokesperson told Mediaite on Tuesday afternoon that, “there is absolutely no coordination with the Daily Caller,” and they have “no idea what Tucker’s motivation is in on the timing of this.”

Well that settles it. Because Fox News wouldn’t lie. They might construct totally fabricated stories that advance their ideological agenda, but they wouldn’t lie. They would spread rumors that smear their perceived enemies, but lie? Never. They would even host disreputable psychiatrists whose ethical lapses precipitated their separation from the American Psychiatric Association as they did with Keith Ablow, who managed to invent a diagnosis of David Brock without ever having met him:

“If you are filled with self-loathing you will see demons on every street corner because you project that self-hatred. […] He’s a dangerous man because having followers and waging war, as he says, or previously being a right-wing hitman, this isn’t accidental language. It’s about violence, destruction, and he feels destroyed in himself.” 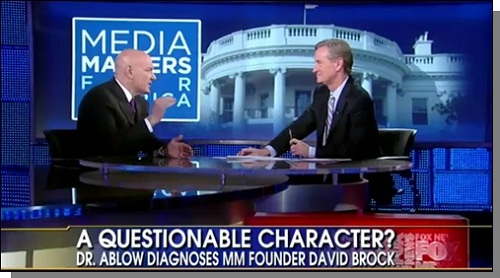 This is actually the second time Ablow has appeared on Fox News with his absurd fantasies (or projections) about Brock. It is Ablow whose character is questionable. A few weeks ago he published an op-ed on FoxNews.com that praised Newt Gingrich’s infidelity as evidence of traits that would help him to make America stronger. Seriously! And who could forget his deranged psycho analysis of President Obama?

I really have to wonder if even the Fox News audience is so intellectually comatose that they wouldn’t recognize the feverish anxiety gushing from Fox in advance of the Media Matters book. A tree stump would notice that they are laying it on awfully thick. So the obvious question is what are they so afraid of? I guess we’ll find out next week.