The Constitution Subcommittee of the House Committee on the Judiciary held a hearing this week that illustrated just how far from reality the advocates of photo IDs, and other methods of suppressing votes, will go to peddle their phony message that voter fraud is rampant in America and must be stopped by enacting legislation that disenfranchises legitimate voters.

The first indication that these hearings were an outright sham was the inclusion of a video by the notoriously dishonest crockumentary maker, James O’Keefe. O’Keefe is best known for producing videos that have been deliberately edited to give false impressions that advance his political agenda. His antics include plying teachers with alcohol in order to embarrass them, and attempting to seduce a CNN reporter aboard his “Love Boat.” 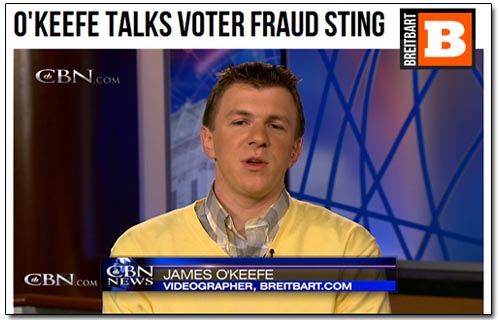 He is presently on probation for crimes committed in the federal offices of a United States senator where he unlawfully impersonated a telephone repairman. (And, according to a recent appearance on the Christian Broadcast Network, he is now officially the Breitbart videographer, a role the late Andrew Breitbart had never permitted).

The Republican led congress has tarnished its own reputation in many ways in the last couple of years, but never more pathetically than by giving this cretin a platform and vouching for his credibility. As has been proven previously, the O’Keefe video presented at the hearing proved nothing other than that O’Keefe is a recidivist lawbreaker.

Adding to the perception of the hearing being a sham is the fact that the GOP committee chair, Lamar Smith, would allow only one witness to rebut the three conservative partisans that Smith invited to testify – two of whom represented the Republican National Lawyers Association (RNLA), an organization dedicated to advancing the myth of widespread voter fraud. Their web site features a page with a list of alleged offenses, however the vast majority are not voter fraud at all, but other violations concerning registration or precinct errors. The few instances that deal with actual voter fraud are mostly involving absentee ballots or other issues on which the proposed voter ID laws would have no effect. As might be expected, their testimony was predictably slanted in favor of legislation that puts unnecessary and ineffective obstacles in the way of citizens casting votes.

Smith’s opening statement was a perfect example of the lengths that conservatives will go to misrepresent the facts on this issue. He begins by making the tired argument that since photo IDs are required “to open a bank account, cash a check, drive a car, or board a plane […] then why is it not required to exercise one of our most valuable democratic rights?” The answer is, of course, because voting is a valuable democratic right enshrined in the constitution, unlike the other examples cited by Smith. Access to voting should be expanded, not inhibited.

Smith goes on to suggest that voter fraud is a serious problem because polls show that Americans think it is. Setting aside that Smith referenced a poll by the right-wing pollster Rasmussen, the evidence of voter fraud is not validated by people’s perceptions. It can actually be studied and verified. And the studies show that voter fraud is extremely rare and neither Smith nor anyone else on the GOP side has bothered to rebut those facts. So they pivot to the question of whether the proposed laws are discriminatory. On that issue Smith criticizes Justice Department efforts to ensure equal access to voting. In an example utilizing the state of South Carolina, where voting rights were found to be discriminatory and is required to “pre-clear” any changes to their voting laws, Smith said…

The Department claims that the laws are discriminatory because minorities are less likely to have the required IDs. But a closer look at the Department’s math shows that their arguments simply don’t add up.

For example, in South Carolina, 90% of blacks have photo IDs compared with 92% of whites. So the Justice Department seeks to override a state law because of a difference of less than 2%.

OK then, let’s help Lamar do the math. South Carolina has about 4.6 million residents, approximately 28% of whom are black. So if 2% of them are blocked from voting for lack of photo IDs, that means that 25,700 Americans have been deprived of their right to vote. That’s the number of disenfranchised citizens that Smith and his colleagues regard as acceptable in order to prevent nearly non-existent voter fraud. In fact, the RNLA web site found only one case of alleged voter fraud in South Carolina in ten years. And for that single incident the GOP wants block 26 thousand African-Americans from voting. But hey, it’s only 2%, so who cares?

This is indicative of the Republican obsession to steal elections by enacting laws that have the effect of prohibiting their opponents from participating. These so-called voter integrity laws are thinly disguised attacks on democracy and negatively impact students, minorities, and seniors – all constituencies that frequently vote for Democrats. These cynical and un-American initiatives must not be allowed to succeed, and the GOP must be exposed for their blatant bias and corruption.