The Breitbart site is well known for dishonesty and rabid servility to the uber-rightist agenda. But this morning they may have outdone themselves in an Olympian feat of hypocrisy.

The Washington Post published an article today by Jason Horowitz, detailing accounts of bullying and possible gay-bashing by Mitt Romney while attending the elite Cranbrook prep school. According to five independently acquired reports by his former schoolmates, Romney led verbal and physical assaults on other students who were presumed to be gay.

Responding to that article, Breitbrat Ben Shapiro posted a frenetic critique that took the Post to task for what he called “an egregious hit piece.” Shapiro saw both fallacy and conspiracy on the part of the Post.

[T]he timing of the story is obviously designed to protect President Barack Obama, who just yesterday said that he would embrace same-sex marriage. The narrative from the media therefore became: Obama is fine with gays, Romney hates them. Since they had zero evidence that Romney has any antipathy toward homosexuals, they had to dig up an incident nearly 50 years ago, invest it with anti-gay rage, and print it as fact.

This is character assassination of the worst kind. It doesn’t go to Romney’s deeply-held beliefs and positions. It doesn’t show how he was defined as a young man. It’s just an old prank brought up and infused with nastiness, sans evidence, in order to turn Romney into a jerk in the public eye.

Breitbrat Ben’s assertion that this story was timed to benefit the President reveals his inability to comprehend reality. For Shapiro’s timing conspiracy theory to be true, the White House must have told Horowitz to start working on the story months ago so that it would be ready the day after an announcement that no one could have anticipated.

Shapiro’s defense of Romney as having no ‘antipathy toward homosexuals” surely rings hollow to all the homosexuals who would be forbidden to marry or even enjoy the same civil liberties as straight citizens. And his characterization of physical assault and possible gay-bashing as merely “an old prank” is evidence of Shapiro’s own insensitivity to such victimization.

But the most brazenly unhinged assertion in Shapiro’s column is his lambasting of the Post for “dig[ging] up an incident nearly 50 years ago” and declaring that “It doesn’t show how [Romney] was defined as a young man.” Seriously?

Shapiro, and others on the Breitbart team, have spent months digging up ancient material about Obama in a relentless campaign of character assassination. All of it was meant to show how Obama was defined as a young man. However, most of it fell impotently into the dustbin of pseudo-journalism due its irrelevancy, but their intent was clear. They called their slander “vetting” and posted such inane classics as Obama embracing his law professor at Harvard – the well-respected Derrick Bell, who was the first African-American to receive tenure at Harvard Law School. 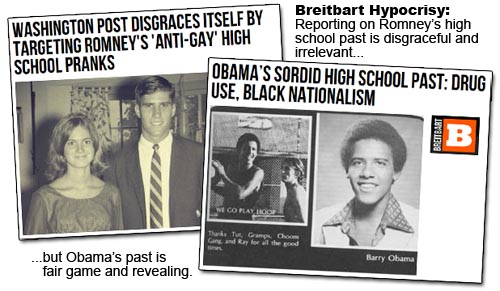 Somehow the irony and hypocrisy of posting two stories – one complaining about reports of Romney’s past and the other doing to Obama what he was complaining about – on the very same day, seems to have escaped the wet noodle mind of Breitbrat Ben. His article on Obama rehashed information that has been known for years and was disclosed by Obama in his own writings and speeches.

But that didn’t stop Shapiro from misrepresenting the truth. He contradicted himself by asserting that “Obama, by all accounts, was a habitual drug user in high school,” even though a couple of paragraphs down he cited a report in the New York Times wherein Obama’s classmates said that drugs played only a “bit part” in Obama’s youth. So it obviously wasn’t “by all accounts.” Then Shapiro went on to scattershoot tired and false allegations that Obama was a black nationalist and a communist.

When a phony journalist like Shapiro can write an article about the absurdity of dredging up a decades old story, and then himself dredges up a decades old story – the same day – there has been a serious cognitive disconnect. It is a sign that these people are either severely disturbed or deliberately deceitful. Either way it is additional evidence that they simply cannot be taken seriously and that they may require acute care at an in-patient facility.

[Update] Romney has responded to the WaPo story by saying that…

“I played a lot of pranks in high school and they describe some that well you just say to yourself, back in high school well I did some dumb things and if anybody was hurt by that or offended obviously I apologize but overall high school years were a long time ago”

Romney also said that the didn’t recall having held down a classmate and cutting off his hair. Yeah right. His five school chums all remember, but the guy with the scissors has forgotten. He further said that it had nothing to do with the sexual orientation of the victim. But how could he know that if he doesn’t recall the incident? That’s like saying “No, I didn’t kill my wife. And besides, she deserved it.”