In the few days since President Obama expressed his personal support for same-sex marriage, the knee-jerk Right-Wing Noise Machine has blasted the historic stance as a flip-flop, a fundraising stunt, and an affront to God. But Mitt Romeny’s response was particularly noteworthy in that he managed to reverse his previous position (when he promised to be a stronger advocate for gay rights than Ted Kennedy) and lied about his own family at the same time. 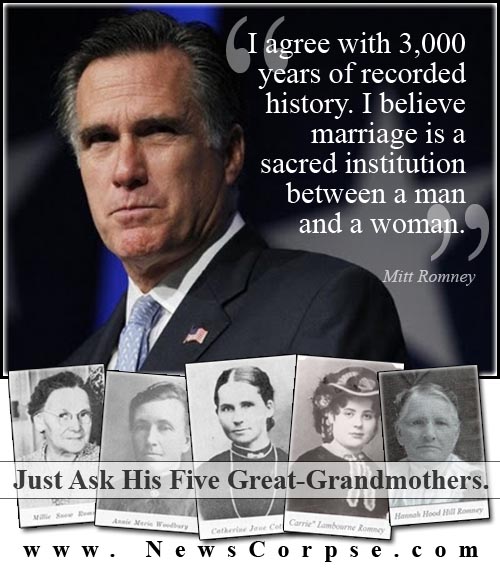 If Romney agrees with 3,000 years of recorded history, he is attacking his own family legacy. Miles Park Romney was his great grandfather who had five wives. So Romney’s sacred institution doesn’t even go back 200 hundred years, much less 3,000. And if we really want to get technical, throughout much of the history of western culture men were permitted to have multiple wives, including many biblical figures.

So the question for Romney is: What the f#&k are you talking about?

10 thoughts on “Mitt Romney And The Sacred Institution Of Marriage”