The Sunlight Foundation just released the results of a study that measures the scholastic grade level of speeches made by members of congress. The scale uses the Flesch-Kincaid test and is based on the length of words and sentences used. Among their findings are that…

“Congress now speaks at almost a full grade level lower than it did just seven years ago, with the most conservative members of Congress speaking on average at the lowest grade level.”

The study further found that it is the “most extreme members” who speak at the lowest grade levels, as well as the most junior. A major turning point was the election of 2010 that saw the introduction of a wave of new Tea Party Republicans to congress. Of the 20 lowest scoring members, 17 were Republicans, and twelve of those are in their first term of office. You have to go down to the 15th place before you find a Democrat.

So is this significant in any way? There are varying perspectives from which to interpret this study. On the surface it could be viewed as evidence that the intellectual capacity of the congress is declining due to the neanderthal behavior of the new Tea Party members who speak in short bursts of small words. That would be consistent with their shallow grasp of most issues and their tendency to reduce every discussion to a battle between liberty and socialism (drilling everywhere = liberty; clean air = socialism).

On the other hand, it could be said that concise expression makes communication more effective and accessible. There is an art to editing and being able to speak with an eloquent simplicity can be both more desirable and more persuasive. Advertisers know this and build their marketing campaigns on logos and slogans that communicate ideas and emotions quickly and succinctly. Political campaign managers and propagandists (but I repeat myself) know it as well.

So the fact that members of congress are speaking at lower grade levels may be an indication of either creeping ignorance or enhanced manipulation. For a specific perspective on this that may help decide which interpretation ought to prevail, let’s take a look at how Fox News characterized a similar study that also used the Flesch-Kincaid method to score President Obama’s State of the Union speech a few months ago. Their headline, declaring that Obama’s speech was written at an 8th grade level, hovered above a picture of a boy in a dunce cap: 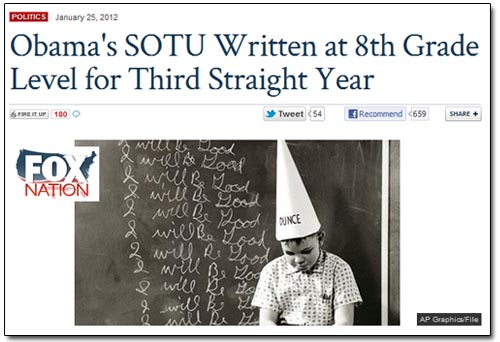 OK then. If Fox thinks that Obama is a dunce because his State of the Union speech scored low on the test, then they must also regard all of these Tea Party representatives as dunces. And for that they have some justification. Perhaps this language analysis isn’t the perfect measure of intelligence or effectiveness in government, so let’s take a look at some of the things they’ve actually said and done and judge them on that. Here are the ten lowest scoring members in the study with some examples of the brilliance that helped them achieve this honor:

Mick Mulvaney (R-SC): Mulvaney is the co-author of the Cut, Cap, and Balance bill that has been at the center of the debate on raising the debt ceiling. The bill would impose stiff reductions, mostly to programs that fund economic growth and aid to the poor. It would also cap spending for entitlement programs and call for a constitutional amendment to balance the budget. Mulvaney is one of those extremists who would rather see the U.S. default on their debts and suffer a credit rating downgrade than reform the tax code to be more equitable and stop favoring the wealthy.

Rob Woodall (R-GA): Woodall once advised a constituent on Medicare that she should reject the government-provided plan and secure her health insurance on the private market. However, when asked why he refused to reject the health plan provided to him by congress he said simply, “Because it’s free.” Then, to cement the impression that he is focused solely on his own welfare and special privileges for congressmen, he was one of only two votes against the STOCK Act that prohibited members of congress from engaging in insider trading.

Rand Paul (R-KY): The son of cranky Libertarian Ron Paul, Rand is such a strong advocate of the free market that he opposes the parts of the Civil Rights Act that prohibit businesses from engaging in discrimination. He believes so firmly in personal responsibility that he wanted to let BP off the hook after their oil rig exploded killing eleven workers and flooding the gulf with toxins. He called criticism of BP “really un-American.” More recently, he said of Obama’s support for same-sex marriage, “Call me cynical, but I didn’t think his views on marriage could get any gayer.”

Sean Duffy (R-WI): At a town hall meeting in Wisconsin, Duffy was asked whether he’d vote to cut his $174,000 congressional salary. He proceeded to whine about how $174,000 really isn’t that much: “I guarantee that I have more debt than all of you. With 6 kids, I still pay off my student loans. I still pay my mortgage.” Sounds like he could benefit from Obama’s proposals to reform mortgage and student loan debt.

Tim Griffin (R-AR): A few years ago there was a scandal in Bush’s Justice Department when it was revealed that they fired several U.S. Attorneys for political reasons. Then, to make matters worse, they filled the vacancies with cronies and partisan patrons. One of those terminated was the U.S. Attorney in Arkansas. His hand-picked replacement was a Karl Rove protege named Tim Griffin.

Todd Akin (R-MO): Last year Akin appeared on the radio program of Family Research Council President Tony Perkins. That would ordinarily be enough to dismiss him as a fringe-dweller, but Akin took the opportunity to broadcast his opinion that “The heart of liberalism really is a hatred for God and a belief that government should replace God.” Akin was also the sponsor of a bill to prohibit courts from hearing legal challenges to the Pledge of Allegiance – an ironic attempt to unconstitutionally elevate congress over the judiciary in order to suppress “liberty and justice for all.”

Vicky Hartzler (R-MO): Like many Tea Party Republicans, Hartzler has expressed doubts about Obama’s citizenship. When questioned about the birth certificate the President released she said “You know, I have a lot of doubts about all that. But I don’t know, I haven’t seen it.” She also opposes same-sex marriage with the old slippery slope argument that associates it with polygamy and pedophilia. She asks, “Why not allow one man and two women or three women to marry? […] Why not allow a 50-year-old man to marry a 12-year-old girl if they love each other and they are committed?”

Tom Graves (R-GA): Graves’ obsession with limiting government is so severe that he voted against bills that would provide organizations that work with children easier access to a federal database so they could screen job applicants for criminal records. But then his grasp of legislation is somewhat faulty. With regard to funding for oil subsidies, he declared them to be a “manipulation of the market place” shortly after voting twice to extend them.

David Schweikert (R-AZ): Perhaps the poster child for this list is Rep. Schweikert who was asked a question about the health insurance mandate provision in the Affordable Care Act, and whether he thought it was fair that prior to the ACA someone could incur medical expenses but not pay for them, raising the cost of health care for everyone else. He responded that “you have the right as an American to be dumb.” And he is fully exercising his rights.

Ron Johnson (R-WI): Johnson has been a harsh critic of the government stimulus bills. But somehow that didn’t stop him from seeking stimulus funds for renovations to the Grand Opera House when he was president of the venue’s board. His explanation when asked to justify the apparent hypocrisy was that “he may have asked a question or two, but that doesn’t mean he supports the stimulus effort or even wanted the money.” Of course not. He was just curious to see if they would hand over the cash, which he would have promptly returned.

The question of whether or not a low score is indicative of low intelligence is still open. Republican pollster and word doctor Frank Luntz spins the results by contending that “It’s not an issue of dumbing it down; it’s an issue of cleaning it up.” But that interpretation only seems to be applicable for Republicans who score poorly. It’s also pure Luntzian meme surgery from the man that calls clear-cutting “healthy forests.”

These ten members of congress, who grace the bottom of the list, were rated as speaking at 7th to 8th grade levels (scoring between 7.95 and 8.62). Eight of them are 1st term Tea Partiers. Is it a coincidence that their work in office reflects the arrogance, selfishness, and resistance to compromise and teamwork that sometimes accompanies the immaturity of youth? When Fox News reported, they decided that that Obama’s low score (8.4) meant that he was a dunce. However, most of these members of congress scored even lower. So by Fox’s standard these members are even dumber, which places them squarely in the Fox audience demographic that studies have shown are more misinformed than consumers of news from other sources.

Full disclosure: This article scored a 10.35 on the Flesch-Kincaid scale.