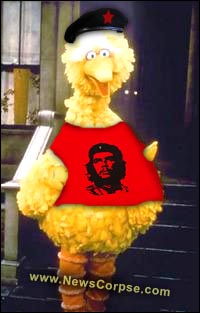 In Mitt Romney’s recent interview with Time’s Mark Halperin, he reprised his attack on one of his favorite targets: PBS. Romney listed public television as one of the first cuts that would come during a Romney administration. In his remarks he even managed to insinuate a commie angle to continued support for the network of Sesame Street.

“I like PBS. I’d like my grandkids to be able to watch PBS. But I’m not willing to borrow money from China, and make my kids have to pay the interest on that, and my grandkids, over generations, as opposed to saying to PBS, look, you’re going to have to raise more money from charitable contributions or from advertising.”

What Romney didn’t say is how that cut would impact the federal deficit. The Corporation for Public Broadcasting is the agency that receives congressional funding for a variety of projects of which PBS is just a part. The entire allocation to the CPB represents about 0.00014 percent of the federal budget. That’s not going to make much a dent in the deficit. But it will have a severe impact on public broadcasting.

This is not the first time that Romney has taken swipes at PBS. Last year he said that he would stop all subsidies to PBS. Here is how I responded at the time:

When Romney says that he wants to “stop certain programs…even some you like,” he is referring to programs that are of significant value to average Americans, but that he can live without because his quarter of a billion dollar net worth enables him to acquire whatever he wants. Romney demonstrates how pitifully out of touch he is by proposing to eliminate funding for PBS, a network that provides educational programming that is not available anywhere else, certainly not in commercial television. He is explicit in what he plans to do:

Despite his denials, killing off Big Bird is precisely what his plan would accomplish. There is a reason that commercial TV does not produce the sort of programming seen on PBS. For-profit networks have to cater to advertisers in order to stay in business. By necessity they are more concerned with generating profit than with quality programming. Take a look at tonight’s primetime schedules of the cable nets that were supposed to compete with public television:

That’s not exactly entertainment designed to enrich America’s children. It’s a jumble of insipid reality programs that repeat ad nauseum. It’s Real Housewives, Swamp Loggers, Hoarders, and info-mercials. If Big Bird were required to rely on advertisers for funding it would not be long before Sesame Street was just another avenue on the Jersey Shore.

That’s the free market model for public broadcasting that Romney and the right advocate. It’s a model that would replace Bert and Ernie with Kim and Chloe. Is that really the example we want to set for our kids?

And is that really the kind of leadership we want for America?