This month’s Hustler Magazine is reported to have published an altered photo of Glenn Beck’s GBTV host, S.E. Cupp. The fake picture is an obscene and repulsive depiction of Cupp that is an insult to her and all women, particularly professional commentators who put themselves in the public view by expressing their opinions. The exercise of constitutional rights ought not to be an invitation to engage in profane humiliation. 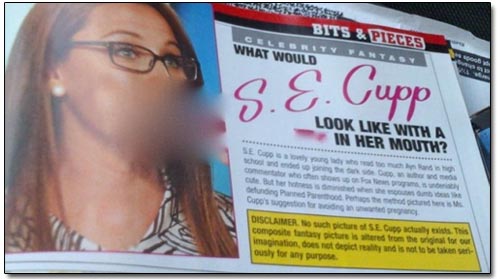 There is, however, a chasm of difference between Flint’s obscenity and Limbaugh’s vulgar characterization of law student Sandra Fluke. Flint is fringe purveyor of pornography who does not lead an army of disciples in a political war. Limbaugh, on the other hand, is a hugely popular rightist icon who commands the attention of his loyal followers and much of the media. It is precisely because of Limbaugh’s success and popular acceptance that his contemptuous incivility be challenged. And it is precisely because of Flint’s aberrant irrelevancy that he can be largely ignored. Flint is a notorious manufacturer of outrage, but when was the last time anyone ever paid close enough attention to him to demand an apology or retraction?

The response from the right to this affair is as fake as the photo in Hustler, and nearly as distasteful. Their unambiguous aim is to cast aspersions on liberals as being responsible for, or aligned with, Flint’s depravity. And leading the pack is Glenn Beck, who so often considers himself the victim of abuse. On his webcast today he interviewed Cupp and conflated this episode with both Limbaugh’s assault on Fluke and, shockingly, the Trayvon Martin shooting. He thinks there is some reason for the National Organization for Women and President Obama to lower themselves to respond to Flint. That would be like asking Mitt Romney to take a position on something said by NAMBLA. For her part, Cupp seemed oddly appreciative in this exchange with Beck:

Cupp: If I could just express a little gratitude for Hustler – and I’m being completely serious here – There is an accompanying sidebar to this story and why they did this to me. And in that paragraph they say it’s because she’s lovely, she’s smart, she’s fine, but she happens to be a crazy conservative, she’s pro-life, and wants to defund Planned Parenthood. And for that she deserves a phallus in her mouth. That is essentially what they’re saying and I have to commend that as being incredibly honest. […] So I wish that the media entities that perform this kind of misogyny would just come out and do what Hustler did instead of just beating around the bush and pretending to be fair, pretending to be above that.

Beck: So may I translate? I think what I’m hearing you say – correct me if I’m wrong – is that Hustler Magazine has higher standards than the media and the National Organization of Women.

Cupp: That’s exactly right. They are more straight forward. They have uncomplicated this belief system, which exists on the left and the right, that my being pro-life, my political views make this OK. It justifies it and I, essentially, deserve it. That is honesty on this issue I have never seen before.

Really? That’s a pretty clear indication that Cupp is actually thankful for the publicity she’s receiving. It is evidence that she is not really disturbed by any of this, but rather is encouraging others in the media to “do what Hustler did.” And both she and Beck seem happy to have this spotlight so that they can turn it on NOW and unnamed persons in the press. That’s just brazenly cynical and dishonest, and it exposes their disingenuousness and their desire only to exploit this as a partisan weapon against their ideological foes.

For the record, some of those whom the right are castigating for not speaking out about this have already spoken out about this. Sandra Fluke, Planned Parenthood, Fox Democrat Jehmu Greene, the Women’s Media Center, and others have Tweeted their disapproval. However, I hope this doesn’t devolve into a parade of forced condemnations from high officials. It serves no purpose for people of integrity to mud wrestle with the likes of Larry Flint. It should suffice that all thoughtful, conscientious people affirm that women be treated with respect. It would be nice if conservatives held that position even when it involves liberal and/or Democratic women like Fluke, Hillary Clinton, and Michele Obama.