The “vetting” of Barack Obama continues at Breitbart News and, true to form, serves only to embarrass the juvenile efforts of Breitbrat Joel Pollak and his childish pals who suffer an acute case of Obama Derangement Syndrome. Today’s banner headline at the Breitbrats sandbox blares: “Exclusive – The Vetting – Senator Barack Obama Attended Bill Ayers Barbecue, July 4, 2005.” 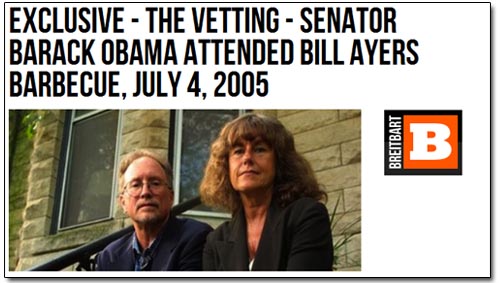 OMG! Barack Obama has been caught at a clandestine socialist assembly of treasonous celebrants of America’s independence. These subversives were observed igniting fires (in BBQ grills) and launching explosives (fireworks). They may even have been imbibing beer and other alcoholic intoxicants.

Breitbrat Joel is clearly proud of the shocking revelation he has uncovered that puts Obama in the backyard of his neighbor, Bill Ayres, for an ostensibly patriotic party. The “proof” that so excites Pollak is an ancient blog post by another neighbor of Ayers that describes a third-hand witness to Obama sharing a picnic table at a Fourth of July gathering. The author said…

“Guess what? I spent the 4th of July evening with star Democrat Barack Obama! Actually, that’s a lie. Obama was at a barbecue at the house next door (given by a law professor who is a former member of the Weather Underground) and we saw him over the fence at our barbecue. Well, the others did. It had started raining and he had gone inside be the time I got there. Nevertheless.”

Well then, that settles it. The author of the post never saw the then-senator, but some unnamed person claims to have seen him. And there couldn’t be any possibility of this mysterious party guest making a mistake, could there? The post goes on to note that despite keeping a watch out for a confirmation siting, there were no other Obama spottings. The only corroboration was “another source” quoted by Pollak who was also not identified.

Even if true, Pollak’s unrestrained glee over this “discovery” means nothing. It stems from his false contention that Obama’s socializing with Ayers contradicts a statement his campaign issued in 2008. However, the quote that Pollak himself posted says…

“Mr. LaBolt said the men first met in 1995 through the education project, the Chicago Annenberg Challenge, and have encountered each other occasionally in public life or in the neighborhood. He said they have not spoken by phone or exchanged e-mail messages since Mr. Obama began serving in the United States Senate in January 2005 and last met more than a year ago when they bumped into each other on the street in Hyde Park.”

Of course, there is nothing in that statement that conflicts with an account of Obama encountering Ayers at a neighborhood party. In fact, it explicitly affirms that Obama had such contacts “in the neighborhood.” Where’s the controversy?

Pollak is plainly obsessed with smearing Obama for having had a relationship with a neighbor who was also a respected university professor and education consultant. But Pollak’s pea-brain can only contain information about Ayers that portrays him as the “radical, domestic terrorist” of his youth some forty years ago. Pollak cannot see past his hostility toward Obama, and the result is hysterical conspiracy tantrums like this. It’s the same sort of dementia that produces absurd postings on Fox Nation like today’s article that proposes that Obama had an “unpresidential” past: 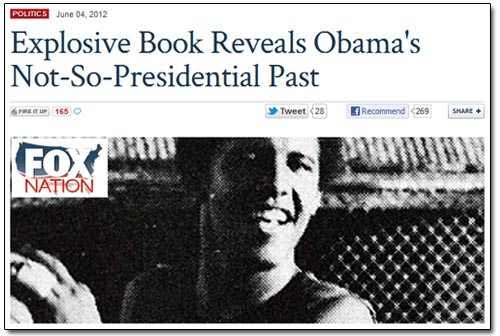 The past to which the Fox Nationalists refer is his adolescence when he did unpresidential things like play basketball and wear hats. Seriously? This is the best they can do?

11 thoughts on “Not So Breitbart: Pathetic Vetting Of Obama’s BBQ With Bill Ayers”