Here is another made up headline from Fox Nation: 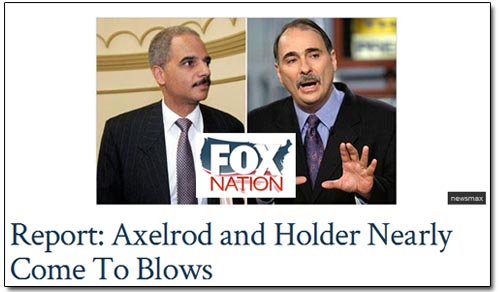 The Fox Nationalists really enjoy cooking up headlines that totally misrepresent the content of the story they are reporting. It often doesn’t matter in the least if the headline has any relevance to the article at all. And at other times the headline is an outright contradiction of the underlying story. The only criteria for Fox is that the headline give as negative impression of Obama as possible whether or not it is true.

In this example the Fox Nationalists assert that Obama’s political aide David Axelrod and Attorney General Eric Holder “Nearly Come To Blows.” That would be a juicy story if there were any truth to it. However, the accompanying article refers to an upcoming book by Daniel Klaidman that says nothing about a physical altercation. It does describe a heated argument, but Fox took it upon themselves to falsely escalate the matter to impending fisticuffs. Here is the full excerpt from Klaidman’s book:

“After the session ended, Axelrod made a beeline for the attorney general. Obama’s senior adviser was incensed. It had gotten back to him that Holder and his aides were spreading the word that he was trying to improperly influence the Justice Department.

Axelrod, who knew all too well that even the hint of White House meddling with Justice Department investigations could detonate a full-blown scandal, had been careful not to come close to that line. ‘Don’t ever, ever accuse me of trying to interfere with the operations of the Justice Department,’ he warned Holder after confronting him in the hallway. ‘I’m not Karl Rove,’ he added, referring to George Bush’s political consigliere, who had been accused of pressuring Justice to fire politically unpopular U.S. attorneys.

Holder did not appreciate being publicly dressed down by the president’s most senior political adviser. Determined to stand his ground against Tammany Hall, the A.G. ripped into him in full view of other White House staffers. ‘That’s bull—-,’ he replied vehemently.

The two men stood chest to chest. It was like a school yard fight back at their shared alma mater, Stuyvesant, the elite public high school for striving kids from New York City. White House staffers caught in the crossfire averted their eyes. Jarrett, whose office was nearby, materialized as things got hot. Petite and perfectly put together as always, she pushed her way between the two men, her sense of decorum disturbed, ordering them to ‘take it out of the hallway.'”

So it was just a couple of guys arguing in close proximity to one another with no raised fists or threats. It was interrupted by a “petite” Valerie Jarrett, which suggests that it could not have been all that dangerous. And the belligerents were not told to cool off or stop fighting, they were not separated, they were merely told to take their argument to a more discreet location.

Ironically, the right-wingers at Fox, and elsewhere in the conservative media who are hyping this story, ought to be impressed with Holder’s position. Conservatives are convinced that Holder is an Obama toady who does everything with a political goal. However, in this affair, he was adamant that his Justice Department not be used as a dumping ground for political operatives. That would seem to prove that the right has Holder all wrong. In fact, Holder and Axelrod are both fiercely concerned with maintaining their integrity with regard to the execution of their duties. That’s what the whole argument is about.

Every presidency should have people who fight to defend the ethical administration of their offices. You can rest assured that in the Bush administration the fights involved people who were unwilling to cross ethical lines as ordered by Rove and Dick Cheney.

One thought on “Fox Nation vs. Reality: Coming To Blows”