In attempting to monitor the outrageous bias and relentless dissemination of propaganda that appears on the Fox News web site, Fox Nation, sometimes the burden is overwhelming. The editors at Fox Nation are just too fast and too furiously committed to their mission of deceiving their glassy-eyed readers, that keeping up becomes an Olympian task.

Just yesterday the stream of craziness was so intense that I am forced to compile them all here in abridged form.

Let’s begin with the most repulsive and unsubstantiated item. The Fox Nationalists post things like this fairly often just to keep the impression of a lawless administration active in the minds of their readers. 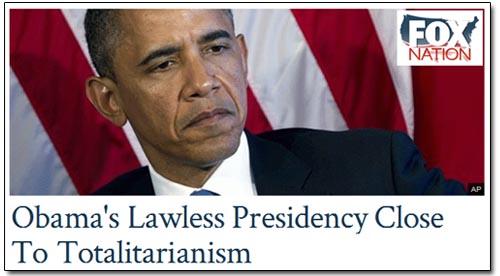 Next up, an absurd an irrelevant item about a man that President Obama met only twice in his life, as a child. But if Fox can make a connection about him to the President, even if the allegation is tenuous, they will jump at the opportunity. 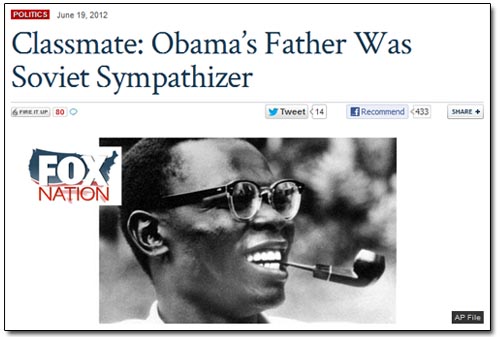 There actually is no enemies list as referenced in this headline. The article is about an FEC complaint filed by the Obama campaign to force Karl Rove’s blatantly political PAC to be treated under the law as any other PAC. Which means that they would have to disclose their donors. Arguing against this is to advocate to maintain a system that permits secretive billionaires to buy elections. 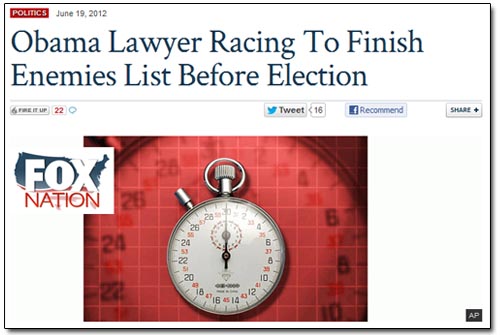 After disingenuously complaining about intimidation tactics in the item above, the Fox Nationalists persist in their intimidation campaign against Media Matters. With no new news whatsoever, Fox & Friends devotes yet another segment to slandering the group and its founder David Brock. 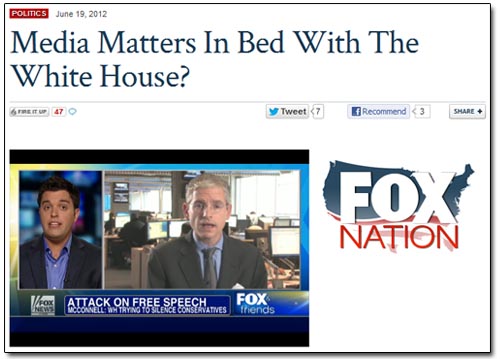 This one is pretty funny. The Fox Nationalists post an item taking Bill Maher to task for making a comedic animal reference with regard to the Republican Party. And in doing so they call him a pig (as they have done many times before). Also note the comment that is typical of the Fox Nation community whenever the opportunity arises to hurl a racist insult at the President. 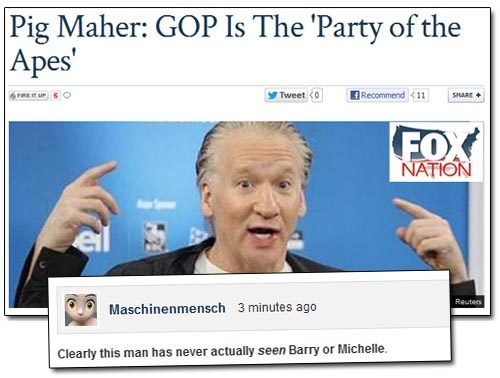 And we’ll close with my personal favorite. The Fox Nationalists posted this item asserting that Obama is not the only president to have been interrupted by reporters in the middle of an address. However, the video they offer as proof shows Reagan being interrupted only after he finished his prepared remarks and was turning the podium over to someone else. 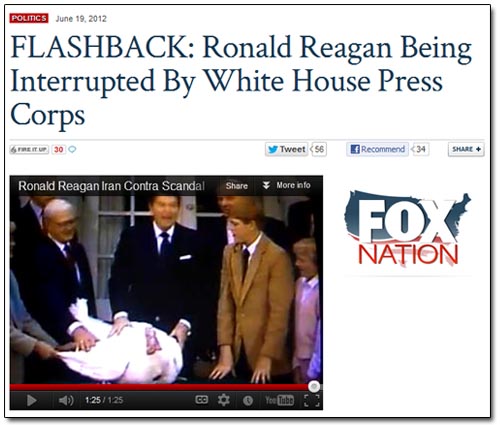 Bear with me, folks. I’m trying to keep up. but it isn’t easy. The Fox Nation editors are masters of deception and they have abundant resources. They are also a closely guarded secret. Unlike every other news enterprise, Fox will not reveal who is responsible for the content on Fox Nation. They have no masthead and have ignored inquiries as to the identity of their staff. I suspect it’s a class of remedial 13 year olds at an evangelical reeducation camp in the basement of News Corp headquarters.