Today on the Factor, Bill O’Reilly played his videotape of the Clash in Nashua. It was truly disgusting listening to that belligerently egotistical megalomaniac barking orders at Obama’s aide, who was just doing his job. I don’t understand how The Fester can show this video and think that it makes him look sympathetic. I’m a little surprised he showed it all (though he did censor the part where he called the aide a “son of a bitch” and he ends it before his talk with Obama). Perhaps he had no choice but to show it after saying publicly on Saturday that he would do so. (Here is CSPAN’s version that contains the exchange between O’Reilly and Obama) 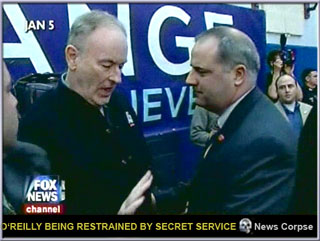 Perhaps the funniest part of this sorry escapade is O’Reilly’s attempt to characterize this as a defense of the Constitution. On his radio program today he made that argument twice:

“…in the tradition of the freedom of the press, I had to remove the man from blocking our camera shot – which I did.” And… “This guy’s clear intent was to block The Factor. And he knew it was me – he knew I was standing there – from getting any shot of the Senator and that’s against the Constitution.”

Then on TV he cast himself as a reluctant champion of the First Amendment:

“Well that’s a total violation of press freedom so I had no choice, ladies and gentlemen, but to uphold the Constitution.”

That’s right…O’Reilly thinks he has a Constitutional right shove his way into a crowd and demand that everyone make room for him and his camera crew. Can you imagine what O’Reilly would have said if Keith Olbermann was caught shoving an aide to John McCain so he could get a better shot? And what journalistic principle was O’Reilly fighting for? Did he have an issue of critical interest to the public to raise with Obama? Well, not unless you think that sucking up to the Senator to try to get him to appear on his TV show is high on the list of the American people’s concerns, because that’s all O’Reilly did.

When O’Reilly finally caught Obama’s attention, it sounded like Obama agreed to appear on The Factor sometime after the New Hampshire primary. I will be very disappointed if that occurs. First, because I have long been advocating that Democrats stay off of Fox News as a matter of principle (see Starve the Beast). And second, because after learning what led up to O’Reilly’s invitation, Obama would be foolish to reward him with an interview.

This is a point also made by NBC’s David Shuster, who couldn’t hold his tongue any longer. Shuster breaks loose and calls O’Reilly a “jerk” and a “buffoon.” And he adds that…

“Fox News ought to be so embarrassed with this guy.”

That’s not likely to happen as O’Reilly epitomizes the Fox News ethic of blustery ignorance. But this video is a rare example of a newsman speaking candidly and honestly about a repulsively demagogic colleague.

I sincerely hope that a lot of people watch O’Reilly tonight, and I know many more will see this affair on YouTube. After catching this little slice of strife it may just start to sink in that this guy needs Dr. Phil’s help more than Britany. And we may have a sound bite that can supersede last year’s “Don’t tase me, bro.” That would be O’Reilly hollering…

By the way, O’Reilly has a poll at billoreilly.com asking if he “was right to remove the guy that was blocking the Factor’s shot?” Feel free to go and vote.

4 thoughts on “The O’Reilly Meltdown Will Be Televised”