For a candidate who has been running for president for at least six years, Mitt Romney is woefully short of a message or a coherent campaign theme. He has spent much of that time Etch-a-Sketching his positions on health care, abortion, gay rights, Iraq, and pretty much anything he has previously taken a position on. He is a man without a political soul. 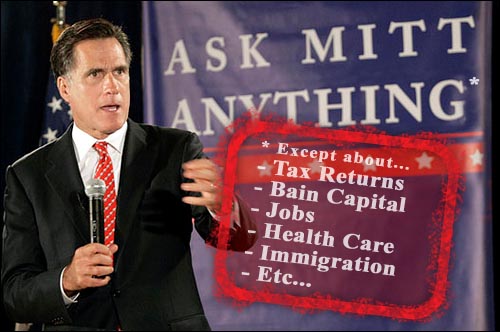 However, the lack of a message does not equate to the lack of a strategy. To the contrary, it makes the formation of an effective game plan all the more critical. Unfortunately for Mitt Romney, he has not been able to devise a game plan, effective or otherwise. Consequently he has settled on a haphazard approach that consists primarily of hurling wildly dishonest misrepresentations of President Obama’s positions and forcing the President to waste precious campaign time debunking Romney’s lies. It’s a tactic that aims to run out the clock on the campaign and hope that some of the mud sticks to the target. For instance, Romney has flung these spitballs at the President:

“You didn’t build that.” This is a deliberate misquoting of Obama who was actually referring to roads and bridges, not the private businesses that Romney has tried to imply were the subject of the remarks.

“We tried our plan and it worked.” Here Romney deliberately asserted that Obama was referencing his own record and implying that it had achieved complete success. In fact, Obama has consistently said that more needs to be done and this comment was plainly referencing the success of the Clinton era policies as opposed to the failure of the GOP’s years under Bush’s policies.

“[Obama] removed the requirement of work from welfare.” Most recently Romney made this accusation that is directly refuted by the facts. What Obama did was to permit waivers for states that could affirm their progress in moving people from welfare to work, and allowing them flexibility to enhance their programs. It’s a modification that Romney himself had requested when he was governor of Massachusetts.

These phony attacks are utterly baseless. However, they do require the Obama team to waste time responding. It seems inevitable that Romney intends to continue this tactic of flinging falsehoods rather than focusing on issues that are relevant to voters. He really doesn’t have much choice considering that he won’t reveal any details of his agenda, which would give the candidates something substantive to discuss. What’s more, he is desperate to divert attention from his refusal to release his tax returns, but he doesn’t have anything else legitimate to talk about.

This strategy is creating some peculiar moments in the campaign. This morning Romney unleashed an onslaught of faux outrage over an Obama ad that featured Joe Soptic, a man who lost his job and health insurance as a result of Romney’s vulture capitalism. Romney complained that the ad portrays him as the killer of Soptic’s wife who died of cancer without insurance. Romney’s spokesperson, Andrea Saul showed up on Fox News (where else?) to declare that if the Soptic’s “had been in Massachusetts, under Gov. Romney’s health care plan, they would have had health care.” The irony in that statement is that Romney has been feverishly trying to avoid the health care plan he implemented as governor. What’s more, this is an argument that admits that the Soptic’s would have benefited from the plan that Romney now seeks to repeal for all Americans.

The overt dishonesty that Romney has exhibited throughout this campaign, a characteristic observed by his GOP opponents in the primary, is a major contributor to his record low favorability ratings. However, the media does not seem to have caught on. President Obama expressed his disappointment in the “false balance” that is presented in the press. That has been a problem for years. It is simply unacceptable that reporters insist on balancing facts with lies. There is no journalistic requirement that a story about the organic composition of the moon be “balanced” with the opposing opinion that it is really just green cheese. Politicians whine about bias when they are called out for straying from the facts. But the press has an obligation to be biased, so long as it’s a bias for the truth.

One thought on “Romney Campaign Strategy Revealed: Force Obama To Shoot Down A Barrage Of Lies”