A new debate is developing around the reluctance of Mitt Romney to release his tax returns as almost every presidential candidate has for the past forty years. Obviously the prospect of leveling with the American people is abhorrent to Romney as he strains desperately to keep his financial past a deep dark secret.

The new twist is that numerous Republicans and Romney backers are offering him advice on how to deal with the blowback he is suffering for his secrecy. It appears that everyone agrees that continuing to conceal his taxes has been noticeably detrimental to his campaign and that he needs a way out – fast. So conservatives have coordinated a response that they think will shift the focus back to President Obama:

Wayne Allyn Root (TheBlaze): Romney should call a press conference and issue a challenge in front of the nation. He should agree to release more of his tax returns, only if Obama unseals his college records.
Mike Huckabee: Let [Romney] make this challenge. I’ll release my tax returns when Barack Obama releases his college transcripts
Donald Trump: If I were Romney, I would say very simply I will release my returns, which are 100 percent legit, if you release the information that we want
Judson Phillips (Tea Party Nation): There are a lot of records that Americans should want to see from Barack Obama. To start with, there are his records from Occidental College.
Rush Limbaugh: I am calling on Barack Obama to release his Harvard transcripts.
Erick Erickson (CNN): If I were Romney, I would not release them until Barack Obama released his college transcripts.

What a great idea. I am totally in support of this. Even though no candidate has ever had to release college records and it may be a precedent that would be better left unset, in this particular circumstance it could have a beneficial effect. If Obama were to call their bluff and accept this challenge we would finally get to see what Romney is hiding in his tax returns. There is just one problem. 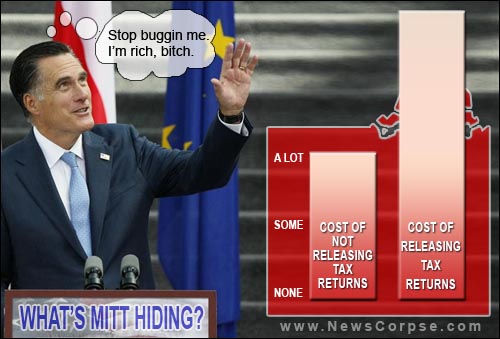 Despite the gathering horde of right-wingers rushing to propose this challenge, there is one very conspicuous player who has not stepped onto the field. That’s right, Mitt Romney has not taken up the call to engage in this political truth-or-dare. Why do you suppose that is? Most likely he cannot risk the prospect of Obama agreeing to trade personal histories with him because of the harm he would endure if voters knew what is in his tax returns. It’s easy for a gaggle of pundits to issue meaningless challenges for which they cannot insure Romney’s compliance, but it is highly unlikely that Romney himself will take it up.

This allegedly spontaneous surge of right-wingers proposing a doc-dump contest is intended to put Obama on the defensive. As usual, Fox News is tightly integrated in the scheme with two of the quotes above (Huckabee and Trump) provided by people on the Fox payroll. Additionally, the quote from Wayne Root is the featured headline atop the Fox Nation web site today. Root’s column is a cornucopia of conspiracy crapola that burnishes his birther status.

Root: Here’s my gut belief: Obama got a leg up by being admitted to both Occidental and Columbia as a foreign exchange student. He was raised as a young boy in Indonesia. But did his mother ever change him back to a U.S. citizen?

It is notable that while a motley collection of conservative blowhards are trying to goad Obama and Romney into a street fight, there are a few far more authoritative voices that we have yet to hear from on the matter of Romney’s taxes. Arthur B. Culvahouse, Jr. headed up John McCain’s VP vetting operation. Along with campaign manager Rick Davis, and McCain himself, these were the only people known to have seen Romney’s tax returns in recent years. And none of them have stepped forward to confirm Romney’s assertion that he paid taxes in the last ten years. The only comment McCain has made on the subject was that Romney’s taxes had nothing to do with his decision to choose Sarah Palin. He just “thought that Sarah Palin was the better candidate.” Let that sink in for a minute.

As I stated above, I think it would be great if Romney actually had the guts to issue a challenge to Obama to trade tax returns for college transcripts. And I think Obama would jump at the chance. However, there are good reasons for Obama to be reluctant to engage in such a contest. First of all, it is unseemly that no other candidate for president has ever been asked to release his academic records. For some reason, conservatives have selected Obama as the first candidate ever to be subjected to such inquiries. He’s also the first ever to be asked to show a birth certificate. In addition he has been challenged on his religion and his patriotism as well. It’s a pattern that aims to define the country’s first black president as foreign, treasonous, and somehow apart from the rest of America. For that reason it would be unwise to comply with ridiculous demands to prove his fitness to serve. Such demands are concessions to irrational hatred and bigotry.

On the other hand, there is no valid reason for Romney to continue to be obstinate about releasing his tax returns. It complies with a forty year precedent set by his own father. More importantly, it is vital information that voters require to assess the qualifications of someone who seeks to take control of the nation’s economy. Particularly a candidate who has based his whole campaign on his alleged financial acumen.