Don’t send that email! Your “liberal” email account is undermining your values and your country. That’s the allegation in a Fox News editorial by Michael Reagan. 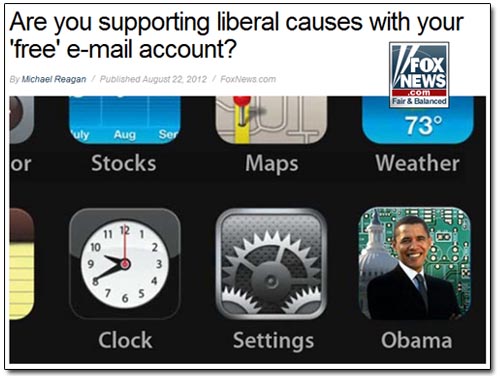 “If you use a Gmail or Yahoo e-mail address and are pro-life, support gun rights and oppose ObamaCare, you are funding activities aimed at trashing your own beliefs.”

The charges by Reagan are based on his assessment of campaign donations to Democrats and Republicans by employees of Yahoo, Google, and Microsoft. It is a wholly invalid analysis because it represents the views of individuals who happen to work for those companies, not the views of the companies themselves. Reagan begins with the example of Yahoo’s CEO who bundled donations for the Obama campaign. The bulk of her fundraising actually involved personal acquaintances, people who had nothing to do with Yahoo. [Note: we know who is bundling for Obama because the campaign reports it on their web site. Mitt Romney refuses to reveal the identities of their bundlers]

Nevertheless, Reagan flatly and falsely states that “the proceeds of those [companies] are often used to support the liberal political agenda.” He offers no evidence to back that up. So the question arises as to what his motivation is to make these phony claims. And the answer is just a few paragraphs down:

“Conservative friends and associates are often surprised when I ask: ‘Why are you supporting liberal candidates and causes with your free e-mail?’ They react with disbelief, but that is precisely what is happening.

“We devised Reagan.com as an alternative to the big e-mail providers so customers will know that they are subsidizing candidates or causes with which they disagree, but so they may also feel that their private messages stay that way.”

There you have it. It’s nothing but a bald-faced marketing pitch for Reagan’s own commercial enterprise aimed at frightened and paranoid conservatives. He is seeking to line his pockets with the profits from a service that charges $40.00 a year for something most people currently get for free. And Fox News is permitting their editorial pages to be hijacked by this advertisement for a private business that is operated by their own employee. Using op-eds for personal gain is strictly forbidden by legitimate news organizations. So I guess it’s OK for Fox to do it.

In addition to the violation of journalistic ethics, it is also notable that Michael Reagan, the adopted son of Saint Ronald, has chosen to soil the Reagan name by acquiring the Reagan.com domain and using it for such a brazenly self-serving commercial purpose. You would think that a URL as valuable as that would be put to use to advance the legacy of the former president and/or the principles he held. Then again, what principle is more representative of the Republican Party than personal greed at any expense?