The prostitute toe-sucking Fox News contributor, Dick Morris, has once again put his idiot brethren to shame by publicly making remarks that are so over-the-top stupid that it boggles the mind. Internationally known as the “World’s Worst Pundit,” Morris spoke yesterday with Bill O’Reilly guest host Laura Ingraham to discuss the Todd Akin affair. Morris said…

Morris: “I think that story is a big plus for Romney right now. Because the story is not that some kooky Republican congressman running for the senate said something stupid. That was the first story. Now the story is that the responsible leaders of the Republican Party, Romney and McConnell and Ryan and all of them are piling on Akin’s withdraw and he won’t. And that really sends a message to pro-choice women that they don’t need to be afraid of Mitt Romney, that they don’t have to vote for Obama because of that.” 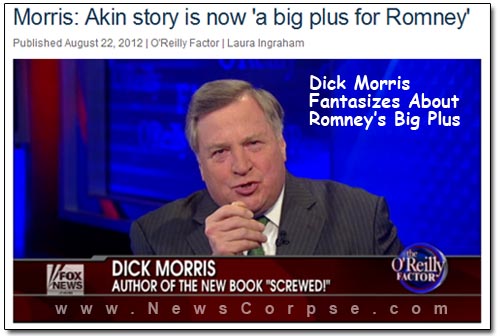 The stupid is so thick it’s hard to know where to begin. Let’s start with Morris’ contention that the story is not about “some kooky Republican.” Yes it is. Akin’s defiant insistence on staying in the race insures that he will continue to be a lightening rod for controversy. However, the story is not just about him. It is also about the rest of the Republican Party who share his views. That includes Mitt Romney and Paul Ryan who have both endorsed legislation and constitutional amendments that would ban abortion for any reason, including rape, incest, and the health of the mother. The Republican Party this week voted to include in their party platform a ban on abortion with no exceptions.

Morris goes on to assert that Romney will somehow benefit because he eventually tried to distance himself from Akin. Morris specifically notes the unsuccessful attempts of Romney and the rest of the GOP leadership to get Akin to withdraw and cites that as “a message to pro-choice women.” Indeed it is. It’s a message of failure. It’s a message that Romney et al are incompetent and have no influence, even over “kooky Republican congressmen” who see no need to comply with Romney’s demands. Contrary to Morris’ claim that women “don’t need to be afraid of Mitt Romney,” the reality is that they do need to fear Romney. and not just because he is unable to strip his party of its most extreme positions, but also because he holds those positions himself. The notion that it’s safe for pro-choice women to vote for Romney is just plain delusional.

Finally, if Morris thinks that the Akin story is a plus for Romney, then why is Romney avoiding it so strenuously? This morning Romney held a series of interviews with local media in Colorado. In order to be granted an interview, Romney forced the reporters to agree not to ask any questions about abortion or Akin. That’s an admission of fear on Romney’s part. It’s also a concession that he won’t get away with when talking to the national press.

Dick Morris seems to come up with new embarrassments every time he opens his mouth. He is a lazy thinker and a transparently biased hack. Last year he openly admitted that he was going to refrain from criticizing Romney, even when he disagreed with him.

So Morris has confessed that he is operating as a shill for Romney, even though he privately objects to Romney’s positions and his tendency to flip-flop on issues. Yet Fox News continues to employ him as a “fair and balanced” political analyst. That says something about both Morris and Fox.

2 thoughts on “Pundit Ignoramus: Dick Morris Says Todd Akin Story Is A Big Plus For Romney”