In a monumental display of [Pick One:] 1) Irony; 2) Hypocrisy; 3) Arrogance; 4) All of the Above; Mitt Romney unloaded two barrels of hollow-point criticism at businesses who use foreign tax shelters to shield their income from U.S. taxes.

Romney: “We’ve got to make it easier for small businesses. Big business is doing fine in many places – they get the loans they need, they can deal with all the regulation. They know how to find ways to get through the tax code, save money by putting various things in the places where there are low tax havens around the world for their businesses. But small business is getting crushed.” 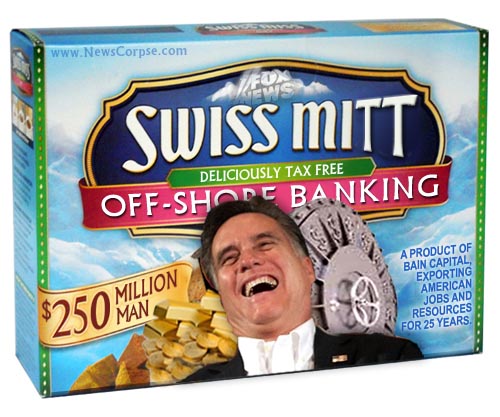 Romney was speaking to a private group of supporters at a fundraiser in Minnesota yesterday. He seemingly is unaware of the hypocrisy in his remarks, as well as the tone-deaf insensitivity to the majority of Americans who cannot take advantage of the loopholes that people like Romney have created for themselves. And while he lambastes big businesses for exploiting the tax code and foreign stash accounts, he has yet to propose any reforms that would address the matter.

Also notable in his remarks is the statement that “big business is doing fine.” When President Obama made a similar remark about the private sector, Romney and his surrogates plucked it of its original context and misrepresented the President as having said that the economy overall is fine. How would Romney respond if Democrats were to do the same thing with this comment? And Democrats would not even have to obscure the context because Romney actually did say this without qualification.

If big business is doing so well, then why aren’t they hiring? Romney’s assessment is a direct contradiction of his previous analysis of the economy. He has been adamant that Obama’s stewardship of the economy has failed and that a course correction would produce more prosperity and jobs. But now, before a freindly audience of wealthy donors he hails the success of businesses but fails to explain why the prosperity and jobs have not followed.

In these remarks Romney has demonstrated that he is a poor judge of economic affairs and astonishingly lacking in self-awareness as he castigates others for exploiting off-shore tax shelters that he uses himself. No wonder he so obstinately refuses to level with the American people about his tax returns. And next week he will enter the GOP convention with the theme “We Built That,” but will decline to acknowledge that the facility hosting the event was built with a majority (62%) of government funds.