The next time you hear the Fox News slogan “fair and balanced,” be sure to remember that their rendering of fairness is to trot out covert conservatives and label them Democrats. Their concept of balance is to pair a right-winger with a far-right-winger. 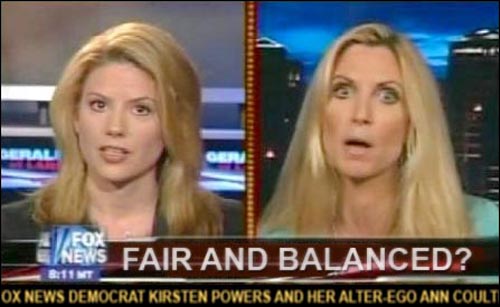 A perfect illustration of this is the op-ed on the Fox News web site posted by Kirsten Powers. If you changed the name in the byline to Ann Coulter nobody would have blinked an eye. And the anti-Obama bile begins with the title: “President Obama, stop blaming the victim for Mideast violence.”

This characterization of the debate could not be more biased and dishonest if it had come from Sean Hannity (on whose show Powers frequently appears). Her article takes the position that President Obama has not directed enough outrage to the perpetrators of the recent atrocities in Libya and Egypt. Her evidence of this is that Obama referred to the anti-Islam film reputed to have inspired the violence as “disgusting and reprehensible,” but went soft in criticizing the rioters by saying only that he “strongly condemn[ed] the outrageous attack.”

First of all, I’m not sure that Powers understands that a strong condemnation is just as resolute a criticism as an expression of disgust. They both send a pretty clear message of unmitigated disapproval. But Powers left out of her wimp-baiting the fact that Obama also declared unequivocally that those responsible for the attacks would be brought to justice. His record on accomplishing that task is familiar to the dozens of dead Al Qaeda operatives, including Osama Bin Laden.

In an effort to bolster her liberal bona fides, Powers brags that she has…

“…defended the Obama administration against the complaints from the right that they have run an ‘apology tour’ in the Middle East because I believe the US should admit when we make mistakes.”

Of course an actual liberal spokesperson who isn’t a Fox toady would have defended the President because there never was an “apology tour.” It was a complete fabrication by rightist liars. Yet Powers has accepted the phony premise and is now complicit in propagating it.

Powers spends much of her column seemingly offended herself that the Da Vinci Code or Bill Maher have engaged in offensive utterings directed at Christians. It’s a comparison that is so absurdly misused that one has to be concerned about her mental stability. Her contention is that our response to religious insults, and the actions they provoke, be the same for American Christians as for Middle-Eastern Muslims. But she is ignoring reality with that shallow opinion. There are, after all, no Christians rioting in the streets of Tuscaloosa.

Whether we approve or not, there are distinct differences between our cultures. Most of the world’s 1.2 billion Muslims have not participated in any violence, and in fact reject it. There were probably no more than a hundred protesters who have resorted to violence in the events of the past week. But the President, and the official American position, has to take into account the potential for harm to Americans at home and abroad and to mitigate such dangers. That’s a responsibility that Powers and her pundit class don’t have to labor under. And it’s the reason that Obama’s public statements exhibit a measure of diplomacy that loudmouth commentators lack.

The President is doing what presidents do. He is accumulating facts and intelligence. He is communicating with allies and his defense and security staff. He is strategizing in private so as not to alert our enemies or further inflame an already volatile situation. That’s how adults with real responsibilities, and lives in the balance, handle these matters. Already Libya has arrested four suspects in the embassy murders.

Obama doesn’t have to talk tough and thump his chest (like our last president, Bush, who achieved nothing). He just needs to get results and administer justice. With less than a week having transpired, there is no reason to believe that Obama is not progressing toward those ends. And it doesn’t help to have Fox propagandists pretending to be on the President’s side and making irresponsible statements like this:

“The condemnations are paired in with claims about respecting religious beliefs, which is implicit sympathy for the claims of some of the attackers and rioters.”

So Powers thinks that respecting religious beliefs is tantamount to sympathizing with terrorists. She cannot comprehend that the respect is offered to the vast majority of peaceful Muslims who had nothing to do with last week’s murders. If she thinks that demonstrating American principles of freedom of religion must be dispensed with because a few members of a religion are reprehensible killers, then she doesn’t have much faith in American principles.

It’s a good thing that Powers is confined to the narrow plank of conservative media that is willing to tolerate her, because her views would be tragically inappropriate in any official diplomatic post. What’s more, she is not the sort of person that liberals want representing their views on national television. She is just another Fox News phony (ala Pat Caddell, Doug Schoen, etc.) acting as an accomplice to tarnish liberals and fill the seat of someone who might otherwise take legitimately progressive positions.