It’s not bad enough that Fox News lies incessantly and engages in ongoing campaigns to insult President Obama, and the millions of Americans who support him, but today they posted an entirely unnecessary triviality that served only to tarnish a day of remembrance solely for the purpose of landing a political low blow against the President.

The breaking news story that Fox Nation was compelled to report was “Obama’s Twitter Feed Hawks Campaign Sweatshirts During Ambassador’s Casket Transfer Ceremony.” What they thought was important about this information is a mystery. After all, Obama’s Twitter account is run by campaign staff, so it’s not as if the President was Tweeting from the Oval Office. But Fox found it necessary to diminish the President’s tribute by juxtaposing two completely unrelated occurrences.

And what makes this all the more repulsive is that Fox’s intent was so pointedly partisan. They obviously never even looked at Mitt Romney’s Twitter feed (or they did but didn’t care) or they would have seen that, at the same time, he was doing the very same thing. He was hawking “a chance to join [him] on board the campaign plane” for a donation to his campaign. 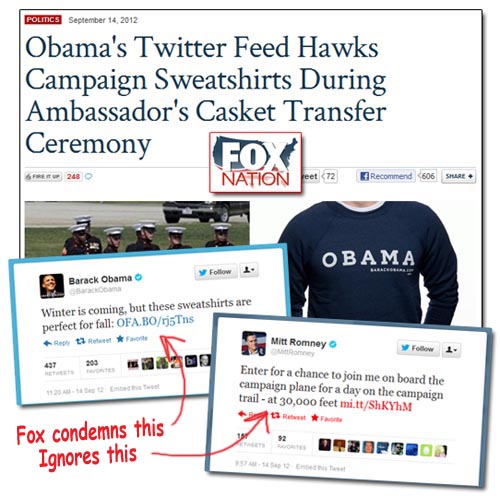 That sort of unfair, unbalanced, and hypocritical coverage is why Fox has so little credibility outside of the mental deficients who make up their audience. It is just unfortunate that they have to demonstrate their disgraceful lack of decency on a day like this, and that a ceremony to honor murdered Americans was turned into a circus on the Fox News web site.