Well, here’s a bad idea, if there ever was one. “National Papa John’s Appreciation Day.” This is brought to you by the folks who supported Chick-Fil-A’s bigotry with an assist from Fox News.

Let’s say there is a nationwide pizza franchise that earns $1.2 billion annually, and whose owner is worth about $350 million. And this cheesy enterprise decides that providing health care for the employees who are central to its success is just too expensive, despite the fact that it would produce healthier, more productive employees and release the federal government and all other insured Americans from the burden of picking up the tab. Never mind that the company gives away millions of pizzas in promotions with the NFL, or that the total additional cost of the health care is only about $0.14 per pizza, or that the owner’s projections are that the program will only cost about $5-8 million a year (less than 1/2 of 1% of earnings)

Then let’s say that this pizza vendor announces that, rather than reducing his profit margins fractionally, or finding other ways to cut costs (like the exorbitant executive salaries), he’s planning to layoff already struggling, low-income employees or reduce their hours so that they don’t qualify for health care – not to mention making it harder for them to buy groceries or pay rent.

Who in their right mind would promote a campaign to support this fiendish and greedy scheme? Fox News of course. Today they are featuring two stories that directly benefit a social media effort to “Stand With Papa John.” The plan is to get people who are in favor of exacerbating the hardships of workers and their families to patronize the pizza parlor on November 16. No doubt they’ll find a few tasteless schmucks who will participate. But screwing your employees to avoid offering them health care over just 14 cents is nobody’s idea of fatherly. 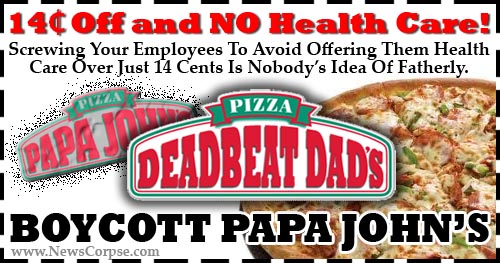 John Schnatter has officially became America’s Deadbeat Dad. And Fox News is his enabler. Just like the Chick-Fil-A affair earlier this year, it is so disappointing to see people rallying around businesses that make hatred and greed the prime ingredient in their product. That doesn’t seem like the sort of thing decent people would turn into a cause celebre. And since that isn’t a particularly good idea, here’s a better one: Print out copies of the “coupon” above and take them to a Papa John’s on Appreciation Day. Leave a few around for other customers so they know exactly how immoral the owner of this pizzeria is.