It happens every year at this time. Chestnuts roast over open fires; Jack Frost nips at your nose; and Fox News declares that there is a “War on Christmas” that only they can see. 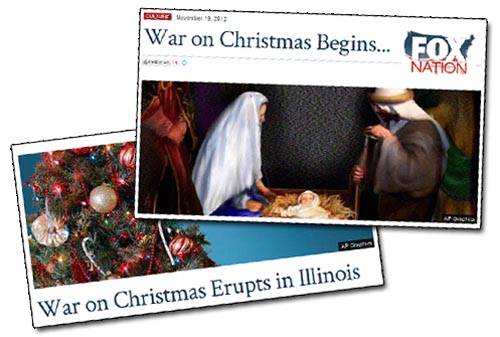 Of all the phony stories that Fox News can invent, this is one of the silliest. This a nation in which a sizable majority is Christian. And many who are not also celebrate the Christmas holiday out of convenience. It is a national holiday for which most people, Christian or not, get the day off of work. Every store in America features Christmas sales with products designed for the holiday. Christmas decorations adorn homes, restaurants, offices, lampposts, and anything else that tinsel can be wrapped around. And amid this all-consuming, orgy of Candy Cane colors and Bing Crosby tunes, Fox News still thinks that Christmas is facing some sort of hostile threat.

Never mind that there is good reason for many Americans to feel slighted by the rampant yuletiding going on all around them. Jews don’t get a national holiday. There are no Muslim films scheduled to run non-stop for eight weeks on thirty different TV channels. Hindus and Buddhists and even Unitarians have to fend for themselves. And don’t even bring up atheists.

Nevertheless, the War on Christmas is something that seems to dominate the Fox News Channel every year despite having no evidence that any war is in progress, except against all of the non-Christians. And if it weren’t enough that Fox is once again ranting over a non-existent war, take alook at what else they are railing about as this holiday season commences:

Yep, that’s a real thing. “Countdown to Doomsday.” Fox News Reporting is covering this vital subject beginning this Wednesday. They are outraged over a made up war on Christmas, but they are producing specials about an expired Mayan calendar. They are committing their awesome journalistic assets to uncover the truth about an alleged Mayan prediction of the demise of planet Earth. Mark my words, brothers and sisters, Fox will get to the bottom of this and declare it to be an ancient hoax. They will firmly denounce any possibility that a civilization from the past can accurately prophesy the end of the world in an apocalyptic holocaust.

Oh wait a minute. I guess there is one ancient civilization’s prophesy of an apocalyptic holocaust with which Fox concurs. And that’s the one that is at war with … someone, maybe the Mayans.