Allen West (R-Whackjob), has finally given up his quixotic legal charades and conceded to Congressman-elect Patrick Murphy of Florida. 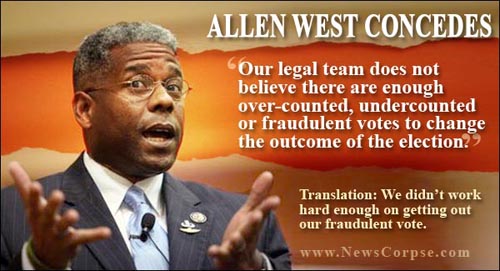 In a rambling whine to the press, West complained that the election was fraught with corruption and wrapped his concession in a lame excuse, saying…

“Our legal team does not believe there are enough over-counted, undercounted or fraudulent votes to change the outcome of the election.”

Getting out our West-to-English dictionary reveals that the translation is: “We didn’t work hard enough on getting out our fraudulent vote.”

There is already much speculation on what West will do next. After being tossed out of the Army (and nearly court martialed) for malfeasance while serving in Iraq, and then being tossed out of congress for being a nut case who called his Democratic colleagues communists, his prospects are fairly narrow. What it comes down to is either a gig at Fox News or a talk radio show. He could also try a congressional comeback in a different district, or take up residency at a think tank. Ordinarily a think tank job would require being able to think, but that wouldn’t be the case for any of the right-wing organizations that would consider West.

Whatever West may chose to do in future, at least he will be unable to cast votes for the loony legislation that the Tea Party caucus in the House has been peddling. Perhaps he could join up with his fellow losers (Joe Walsh, Todd Akin, Richard Mourdock, Linda McMahon, etc.) and form a support group for delusional ex-candidates.

6 thoughts on “One Term And Out: Allen West Finally Concedes Loss”