For the past couple of days the media has been abuzz with reports about foreign policy expert, Tom Ricks, calling Fox News “a wing of the Republican Party” while on Fox News (video below). It was a perfectly appropriate remark in the context of the discussion, but Fox host Jon Scott abruptly ended the interview, which only made the controversy more prominent. 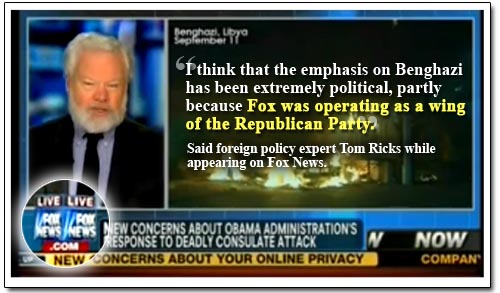 Ricks’ observation that Fox is the media division of the Republican Party is neither original nor unique. Many others have noticed the same obvious bias, including the former director of communications for the White House, Anita Dunn. And conservatives like David Frum have recognized that Fox has become even more influential in GOP politics than an ordinary PR firm would be.

Since the on-air dust-up, Fox VP of News, Michael Clemente, told The Hollywood Reporter that Ricks had apologized to him off the air. That’s a convenient tale considering there is no evidence or witnesses to the alleged apology. Clemente went even further by personally insulting Ricks saying that he “doesn’t have the strength of character to do that publicly.”

And it doesn’t end there. Ricks later responded to Clemente in remarks to the Hollywood Reporter saying…

“Please ask Mr. Clemente what the words of my supposed apology were. I’d be interested to know. Frankly, I don’t remember any such apology.”

“I’ll refresh his memory – what he said following the segment was, ‘Sorry… I’m tired from a non-stop book tour.’ Perhaps now he can finally get some rest.”

This is typical defensive behavior from Fox News. They do not countenance criticism, and when they encounter it they lash out wildly at their critics. One memorable example of this is when a study was released by the University of Maryland that Confirms That Fox News Makes You Stupid, Clemente hit back by insulting the University’s students who had nothing to do with the study. He also alleged that the university was ranked as the “Best Party School,” by the Princeton Review, which was patently false.

So we have evidence that Clemente will brazenly lie when he is confronted by criticism. Consequently, it would be foolish to accept his assertion that Ricks had apologized in the privacy of Clemente’s office. And why would anyone assume that an executive at a network that makes up the news they broadcast would be the least bit averse to making up conversations that cast critics in a negative light?