Continuing a long pattern of decline, Fox News once again underperforms its competitors. The first quarter of a presidential election year can generally be expected to boost viewership for news networks. For CNN and MSNBC this has been markedly apparent. For Fox News…not so much. 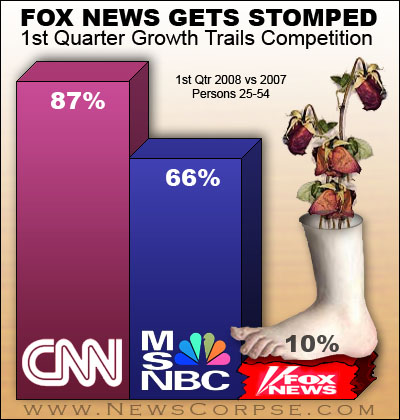 As a result of the hyper-growth of CNN’s prime time schedule (persons 25-54), they actually finished ahead of Fox News for the first time in six years. Another quarter like this and Fox will finish third behind both CNN and MSNBC.

The stagnation of Fox’s audience can be traced in part to the downward spiral of the Bush presidency. Fox has long tethered its fortunes to a conservative ideology that has fallen out of favor. Now they have trouble attracting either viewers or guests from the more moderate and/or progressive population. They also have an age problem. Fox News has both the oldest skewing audience and the oldest prime time line-up. That combination produces a staleness that is reflected in their ratings. It’s ironic that the Republican candidate for president is also the oldest to ever run for the office. He should be a perfect fit for Fox, if not for America.

In addition to CNN’s win over Fox in the average ratings statistics, Fox has fallen to fourth place (with 24.5 million) in cumulative ratings, behind CNN (33.2), MSNBC (28.4), and Headline News (25.9). Cumes represent the number of the network’s unique viewers and are arguably a more precise measure for news programming (explanation here).

So contrary to the boasting of Fox News narcissists, they are not the ratings juggernaut that they would have you believe. In fact, sooner than many might have predicted, they will be reduced to also-rans. In advance of that you can expect that they will fiddle with their programming to deliver even more sensationalistic, high decibel, conflict-driven fare that virtually drips with steamy melodrama, controversy and a nightmarish dread of Muslims, immigrants and Democrats.

24 thoughts on “Fox News No Longer Number One”