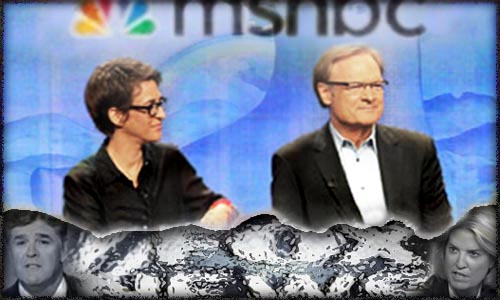 The Ed Show continues to lag behind his network companions, but perhaps he should be cut some slack because he is also airing opposite the highest rated program on cable news, The O’Reilly Factor. Even so, MSNBC’s primetime lineup managed to beat Fox News outright on two nights (Wednesday and Thursday).

The frequency with which MSNBC is topping Fox dispels any notion that this is an anomaly. In fact, from election day through November 30, Maddow and O’Donnell beat Hannity and Van Susteren by 13% and 20% respectively. The full primetime averages for this period for Fox and MSNBC are separated by only 2% with O’Reilly lifting Fox barely into the lead.

Fox News can no longer boast that they are the runaway leader in cable news. Before long they may not be the leader at all. Their audience may be tiring of being lied to and they might not appreciate the filters that Fox has put between them and the real world. There can be only so many times that someone can discover that what they thought they knew for sure was not even close to correct. And people who get their news from Fox have been in that situation too many times already.

Even Fox News executives recognize that by building a bubble of misinformation they alienate their viewers and destroy their credibility (what little they have). Consequently, Fox CEO Roger Ailes has thrown a rug over two of his top contributors, Karl Rove and Dick Morris. Producers must now get prior permission before booking them. Not that that alone would change much, because Sarah Palin, Donald Trump, and the rest of the Fox menagerie will still be honking feverishly at perceived enemies and invented scandals.

In the coming months there may be some dramatic shifts in the cable news arena. Fox’s wobbly leadership will continue to be challenged by MSNBC’s post-election burst of energy. And CNN will likely being putting pressure on both when their new president takes the helm in late January. At this point, I wouldn’t place any bets because literally anything can happen. Who would have predicted a year ago that a lesbian Rhodes scholar (Maddow) would be knocking out the boob tube’s biggest boob (Hannity)?

[Update:] Jealously rears its ugly head. In retaliation for having the audacity to get better ratings than Hannity, Fox is now bashing Maddow for getting a Grammy nomination for the spoken word reading of her book, Drift: The Unmooring Of American Military Power. And the tone of Fox’s attack is typically juvenile as they resort to calling her “Rachel Madd-Cow.” 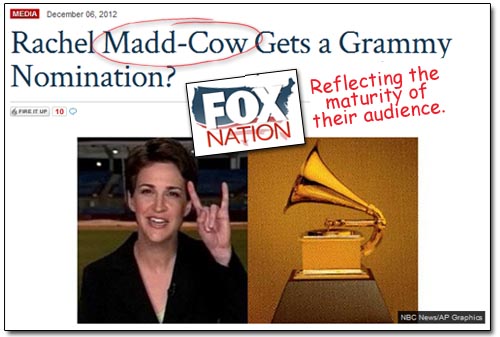 Seriously, how old are these people? Or is this just the only level of discourse they think their audience can comprehend?