Yesterday the news broke that Karl Rove and Dick Morris were being designated pundit-non-grata, at least temporarily, by Fox News CEO Roger Ailes. Apparently even a rabidly biased cable network known as the PR division of the GOP can tire of analysts who rarely get anything right. 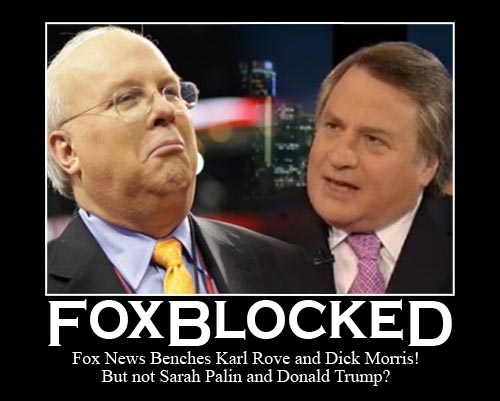 I feel for the poor Fox viewers who are now going to miss out on the monumentally idiotic assessments and predictions by this pair of hacks. With important policy debates on the “fiscal cliff,” new cabinet appointments, immigration, Syria, etc., on the agenda, Fox viewers will be deprived of the insights that have made them so stupefyingly ignorant so long.

But I also wonder what will become of Rove and Morris. Their colleague, Rick Santorum, has already been reduced to joining WorldNetDaily, (aka Birther Central) as a columnist. Neither Rove nor Morris has commented publicly on the curb-stomping they just suffered. But I can’t help but feel that the worst part of this humiliation is that while Ailes dismissed them, he kept Sarah Palin and Donald Trump. How do they console themselves knowing that their commentaries were deemed unsuitable going forward, but Palin’s word salad jumbles, and Trump’s ego-soaked dementia, will continue to get broadcast? OUCH!

No doubt Rove will find a way to self-finance his media presence with funds misappropriated from his Super PAC. And Morris is still posting his vodcasts on his own web site for the willfully dumb and the aficionados of toe-sucking. But somehow, it just won’t be the same without their access to the vast audience of glassy-eyed Fox disciples (which is actually only about 1% of the population). At least we’ll still have Palin and Trump, and Limbaugh and Nugent and Hannity and, maybe, if we’re really, really good, Fox will hire Allen West and give us all something to brighten our holiday.

3 thoughts on “FoxBlocked: What Becomes Of The Fox News Rejects?”