The Second Amendment Solutions crowd has been spoiling for a fight with the Obama administration for years. The President nearly outsmarted them in his first term with a wily strategy of doing nothing about guns except for loosening restrictions in federal parks.

However, that tactic did not fool these Bravehearts. They knew that the real plot was to lay low until the second term and then confiscate anything with a trigger. At least that’s the theory of sweaty-palmed freaks like NRA boss Wayne LaPierre and gun rights evangelist John Snyder. This week on Fox News Snyder weaved a tale of firearms confiscation that would drive Ted Nugent into the fetal position under his bed. And of course, Fox Nation published it as their top headline: 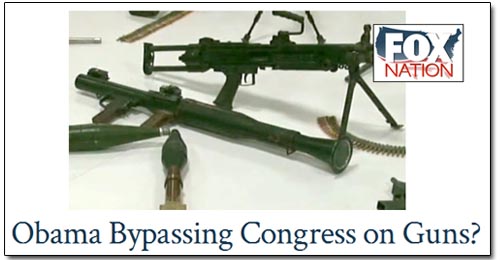 The inquiry in the headline as to whether Obama is bypassing congress on guns is based on – well, nothing at all. There have been no statements from the White House, no bills drafted in Congress, no leaked memos, not even any Capital whispers or pillow talk. This entire wannabe controversy was hatched by Snyder and his assertion that he has confidential sources who have revealed the plot to him. He told Shannon Bream on Fox News that…

“There is a move by the gun grabbers in congress to try to ban semi-automatic firearms or certain semi-automatic firearms, but they probably will not get very far with this proposal because there simply is not public support for it. So the gun grabbers probably would then rely on their boy in the White House to use executive order in this way to try to ban them to keep law-abiding citizens to be able to obtain these firearms for legitimate purposes.”

Snyder could not offer a single shred of evidence that any of that was true. Although I’m sure he was sincere about his racist characterization of the President as the “boy in the White House.” It’s one thing for some goon on the InterTubes to make wildly unsupported claims about conspiracies to violate the Constitution, but for Fox News to invite him on the air for a “serious” discussion is irresponsible and a breach of journalistic ethics. Therefore, it was the perfect story for Fox. And Bream was all too happy to shed any facade of reportorial dignity when she closed the interview by saying…

“Well the White House each time this gun issue has come up has said that the President and the White House have no intention at all of depriving Americans of their second amendment rights, but we know that there’s also a U.N. treaty that the U.S. has now evolved in negotiating and hammering out that would also deal with gun rights so we’ll keep a close eye on what you’ve tagged and on that treaty as well.”

Apparently it wasn’t enough to give a platform to a nutjob spewing inane conspiracy theories, Bream had to sweeten the pot by connecting it to another paranoid plot that is also patently untrue. When all is said and done, it is curious why anyone would care much about this. Because even without their guns, right-wingers have plenty of firepower they are able to aim at the President. Later the same day, Fox Nation posted this article featuring Sure-Shot Cheney: 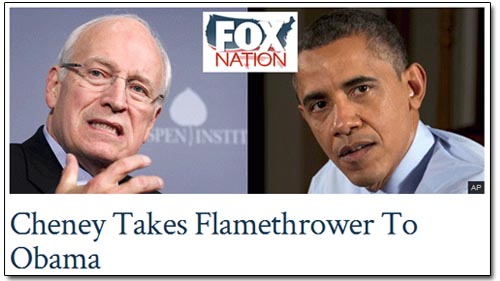 For some reason, the emotionally stunted editors at Fox can’t seem to reference Obama without there being some horrific and bloody threat to his life injected into it.