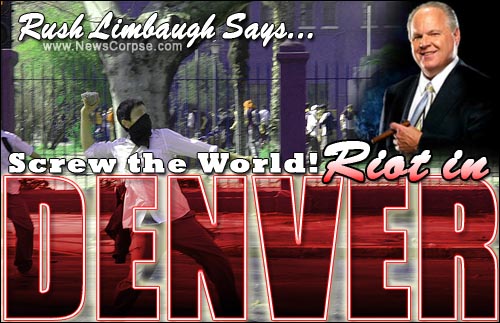 While the Conventional Media is still consumed with remarks made by Barack Obama’s pastor criticizing America, they are virtually ignoring the comments of Rush Limbaugh that are brazenly advocating violence for political gain.

Limbaugh: “Now, I am not inspiring or inciting riots. I’m dreaming. (singing to the tune of White Christmas) I’m dreaming of riots in Denver. Remember 1968?”

Limbaugh says that he isn’t inciting riots, but merely dreaming of them. That distinction is skimpy to say the least. Is he so naive that it has not occurred to him that some portion of his 14 million listeners might be motivated to help him see his dreams come true? Of all the well-deserved criticisms that can be leveled at this ego-bloated pundi-clown, naivetÃ© is not amongst them. He knows the impact of words. He knows his audience. He knows very well the potential consequences of actions.

Limbaugh: “Riots in Denver at the Democrat convention would see to it we don’t elect Democrats – and that’s the best damn thing could happen for this country as far as anything I can think.”

Is it possible to deliberately instigate violence more explicitly than that? The title of this article, “Screw the World! Riot in Denver!” was lifted verbatim from Limbaugh’s web site. That is an unambiguous directive to his listeners who are not called “dittoheads” for nothing. But Limbaugh grants himself somewhat more leeway to engage in hypocrisy. Apparently there are worse things than electing Democrats – i.e. electing John McCain.

Limbaugh: “If I believe the country will suffer with either Hillary, Obama or McCain, I would just as soon the Democrats take the hit … rather than a Republican causing the debacle.”

That, however, hasn’t stopped McCain from pursuing Limbaugh’s favor. Just last February Politico reported that, according to Republican sources, McCain sent an emissary to bring Limbaugh into the fold.

The questions for today are: Will McCain denounce and reject Limbaugh’s repugnant and dangerous remarks? Will the media give an equal amount of airtime to Limbaugh’s lunacy as they did to Rev. Wright’s rant? Will Hell freeze over?

It would be too optimistic to entertain the notion that Limbaugh would be fired over this. He makes too much money for his greedy broadcast benefactors. But if Limbaugh doesn’t face some sort of sanction for this, then what would produce a sanction? Would he have to show up in Denver with a trunk full of Molotov cocktails? Would we need a canceled check payable to Outside Agitators, Inc. (a subsidiary of Blackwater)? If there is trouble in Denver, will there be an investigation to ascertain whether the troublemakers were Limb-bots?

Here’s a link to Limbaugh’s advertisers who might want to reconsider sponsoring a program that advocates violence.

You can also file a complaint with the FCC.

12 thoughts on “Rush Limbaugh: Screw the World! Riot in Denver!”