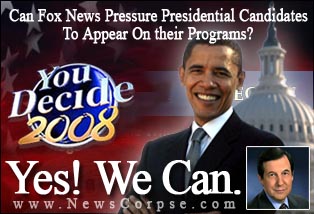 Just prior to Chris Wallace’s interview of Barack Obama on Fox News Sunday, I argued the futility of making an appearance on Fox:

“A strong performance will net him nothing because the audience is limited in both size and ideological diversity. It will end right there. But the slightest misstep will be magnified a hundred fold throughout the Murdoch empire”

I was right. There were no notable gaffes or exploitable vagaries and, consequently, the interview has all but disappeared. So far today I have not seen a single clip of this program on Fox News (or any other network). This despite the fact that prior to the broadcast it was so highly anticipated and heavily promoted. After Wallace made such a big issue of Obama’s appearance, invented his “Obama Watch” countdown, and called Democrats “damned fools“ for not going on Fox, they have not seen fit to re-air any portion of this news-making broadcast.

On the other hand, Fox News (and most other networks) have been re-playing Rev. Wright’s remarks in speeches before the NAACP and the National Press Club repeatedly all day long. That should tell you something about media priorities. Obviously the words of a controversial ex-pastor are far more important to the press than the words of an actual candidate for president.

As for Wallace’s priorities, Josh Nelson at The Seminal provides this revealing breakdown of questions he asked Obama: