See the update to this story here.

Remember this guy: James O’Keefe, a self-styled citizen journalist whose shenanigans have been financed by the likes of Andrew Breitbart. O’Keefe is best known for producing videos that have been deliberately edited to smear his victims and deceive his audience.

Among his most notorious adventures were: His attacks on ACORN, an organization that was later proven to have done nothing unlawful; His attempt to seduce a CNN reporter aboard his “Love Boat” that blew up in his face when his accomplice exposed him; His unlawful trespassing into a Senator’s office disguised as a telephone repairman, which resulted in his conviction for that criminal activity; His effort to demonstrate the existence of voter fraud wherein the only evidence of any fraud was that he engaged in himself; His misrepresentation of NPR officials that was so bad that Glenn Beck’s web site debunked and denounced him; And let’s not forget his alleged drugging and harassment of a female colleague who claims to have been held against her will at a barn in his New Jersey home.

Now choirboy O’Keefe is teasing his latest deception, a project he promises will make journalists angry. Of course, actual journalists have always been angered by charlatans who disgrace their profession. O’Keefe’s current publisher, the conspiracy web rag WorldNetDaily (has Breitbart ditched him?), has more details:

O’Keefe’s crew asked journalists working for CNN, MSNBC and others whether they would put a sign in their lawn that says “Citizens Against Senseless Violence. THIS HOME IS PROUDLY GUN FREE!”

“No journalist wanted the sign,” he says. “Many journalists had armed guards.”

“We also showed up at Eric Holder’s house,” O’Keefe added. “Authorities came to protect him.” 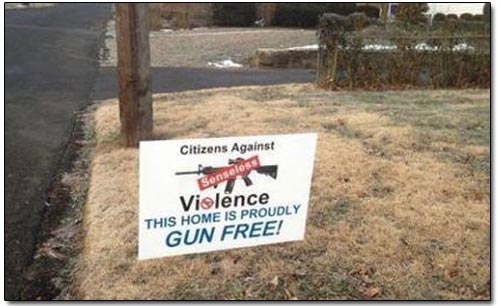 What O’Keefe is trying to prove is completely unfathomable. It makes no sense that a public person like a journalist would ever consider advertising private information like their home address or security arrangements. Journalists often work under circumstances that put themselves at great risk. There is no rational scenario in which their private life is analogous to that of ordinary citizens. Consequently, the revelation that a journalist would decline the absurd offer to post such a sign should be of no surprise to anyone with a functioning brain.

The obvious intent of O’Keefe is to fabricate a situation in which he can attempt to embarrass the target of his childish scheme. It has nothing to do with journalism, and everything to do with the politics of gun worship. What’s more, it completely misrepresents the concept of gun-free zones, which are not efforts to brag about the absence of firearms, but are intended to alert law-abiding citizens that such weapons are not permitted and that bringing them into the designated area would subject them to criminal prosecution.

The gun worshiping crowd is fond of whining that regulations are ineffective because criminals would simply ignore them. However that would also apply to any law, including rape and murder. So their argument is that no laws prohibiting anything should ever be enacted. Clearly that would be insane. Laws do deter people from engaging in the behavior they are intended to inhibit. And for those who are not deterred, laws provide a mechanism to punish the offender. No one has ever suggested that the mere presence of a law would eliminate crime, but any sane person knows that laws are an essential part of the justice system and that they have a legitimate purpose and a demonstrable effect.

O’Keefe has promised that his videos of journalists declining to accommodate his prank will be released soon. If history is any guide they will be severely mangled in the editing room to give the most disparaging possible impression of the subject. But the good news is that, at this point, his reputation has been so shattered that he has been relegated to aligning himself with the bozos at WorldNetDaily, as if Breitbart wasn’t already low enough. Thus, fewer people will be exposed to his dishonest and puerile antics, and this charade will dissolve away without much notice. Because if there’s one thing the world needs less of, it’s O’Keefe’s smug mug heralding more deceitful excursions into pseudo-journalism.