Today Fox Nation went after Joe Biden’s Gun Violence Prevention Task Force by reporting that one of the members is the father of a young man who was convicted in 2008 of plotting a Columbine-style attack at his school. But that was only half of the story. 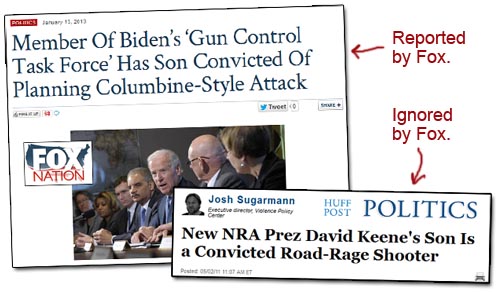 Thomas Nee was president of the Boston Police Patrolman’s Association. He was selected to be a member of the task force due to his life-long career in law enforcement and his 30 year association with Biden. Unfortunately, he also happens to have a son who ran afoul of the law.

Joseph Nee was a teenager when he reportedly conspired with his friend, Tobin Kerns, to commit an assault on the students and faculty of his Marshfield, MA, school. He was convicted and sentenced to nine months, with another two years of probation. The defense noted that it was Joseph who went to the police to report the plot, which resulted in his arrest and that of his friend. Consequently, due to Joseph’s renunciation of the activity and cooperation with law enforcement, no one was ever actually threatened or harmed.

The article posted by the Fox Nationalists featured the sensationalist headline “Member Of Biden’s ‘Gun Control Task Force’ Has Son Convicted Of Planning Columbine-Style Attack.” The clear intent on the part of Fox was to tarnish the task force’s reputation in order to bias public opinion against its work. None of the details were included by Fox or the Breitbart News column which was its source.

Also not included was the fact that the President of the NRA has also had family problems with regard to criminal gun use. David Keene’s son was convicted of shooting at another man in an incident of road rage. The younger Keene was sentenced to ten years in prison for attempted murder.

To the extent that Fox desires to discredit Biden’s task force by publicizing the actions of a single member’s family, the NRA should be similarly liable for the actions of the spawn of its president. If anything, these kids are a warning sign of the potential risks associated with growing up in families where firearms are revered. Both of these fathers were ardent gun advocates and users, and they raised their kids in households where such weaponry was commonplace.

However, neither of these fathers can reasonably be prohibited from involving themselves in the public discourse on gun violence because of the actions of their sons. And this one-sided effort by Fox to impose a form of censorship via smear tactics is unconscionable, unethical, and further evidence of their unfitness to be regarded as a credible news enterprise.