The congressional hearings on Benghazi continued today with their star attraction, Secretary of State Hillary Clinton. It was as predictable a production of theatrics as might have been expected with Republicans spewing outlandish accusations at Clinton and Democrats rushing to her defense.

Watching from their secret lair, the editors of Fox Nation picked apart the testimony looking for soundbites they could misrepresent. They found one in an exchange with GOP Sen. Ross Johnson (WI-Tea Party) and quickly posted it with a thoroughly dishonest headline: “WH Says It Agrees With Hillary When She Said ‘It Doesn’t Make A Difference’ Who Killed 4 Americans In Benghazi.” 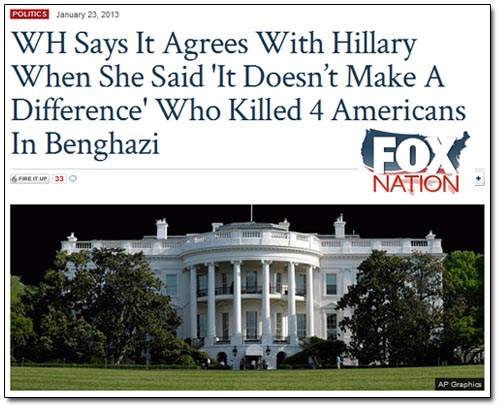 There are two obvious falsehoods contained in that item. First, Clinton never said that it “doesn’t make a difference who killed 4 Americans,” or anything remotely similar. She was responding to a question from Johnson about the early descriptions of what had taken place. There are still varying reports that are being sorted out. Clinton was saying that the debate over what was said in the first few hours or days after the assault was not as important as completing the investigation and bringing the perpetrators to justice. Here is the whole exchange:

JOHNSON: Again, we were misled that there were supposedly protests and then something sprang out of that, an assault spread out of that and that was easily ascertained that that was not the fact and the American people could have known that within days and they didn’t know that.

CLINTON: With all due respect, the fact is, we had four dead Americans. Was it because of a protest or because of guys out for a walk one night and decided to go kill some Americans? What difference, at this point, does it make? It is our job to figure out what happened and do everything we can to prevent it from ever happening again, Senator. Now honestly, I will do my best to answer your questions about this but the fact is that people were trying in real time to get to the best information. The I.C. [Intelligence Community] has a process, I understand, going with the other committees to explain how these talking points came out. But to be clear, it is, from my perspective, less important today, looking backwards, as to why these militants decided they did it than to find them and bring them to justice and then maybe we’ll figure out what was going on in the meantime.

Clinton’s statement was the exact opposite of what the Fox Nationalists wrote in their headline. She was unambiguously stating that her specific concern was about who killed the Americans at the Benghazi facility. That could not have been missed unless it was a deliberate attempt to deceive.

The second falsehood in the headline is, of course, that the White House was not agreeing with the false characterization that Fox posted. They did, however, agree with what Clinton actually said. In fact, press secretary Jay Carney was explicitly agreeing that “whatever was said — based on information provided by the intelligence community – on a series of Sunday shows bears no ultimate relevance.”

So the statements of Clinton and Carney were in alignment, while the reporting of Fox was delusional. And as a small side note, Fox Nation sourced their report to the Washington Post in a link that went somewhere else. If you clicked the “WaPo” link you would have been taken to a right-wing blog called Weasel Zippers. That’s just another example of why you can’t trust anything you read at Fox Nation.