As if America’s school children don’t already have enough to worry about since the Sandy Hook tragedy, now Fox News is complaining about a proposal to put seat belts on school buses.

An op-ed by John Stossel was published today that took the administration to task for the seat belt initiative. He characterized the safety measure as another boondoggle by big government. He mocked the agency that was proposing the new standards. He also argued that it was too expensive and that some studies have concluded that they were unnecessary. But what really destroys his case is that the evidence he relies on to bash the government is from – the government. In fact, it’s the very same agency that he’s bitching about, the National Highway Traffic Safety Administration (NHTSA)

Stossel wrote that a few years ago the NHTSA conducted a study that concluded that seat belts on school buses were “of no value in the majority of fatal accidents.” He listed six additional items culled from the report. He didn’t cite the specific study or the year it was published. There was a study in 2002 that found that seat belts were not effective in severe frontal collisions. However, it also found that the benefits more than offset the risks, particularly with regard to preventing ejections. Apparently there are more types of collisions than just from the front.

Bottom line: Stossel is criticizing the NHTSA’s big government decision to install seat belts in school buses and supporting his criticism with older NHTSA big government data that he misinterprets. But to pile on the stupidity, take a look at the headline from Fox that mangles both spelling and syntax. 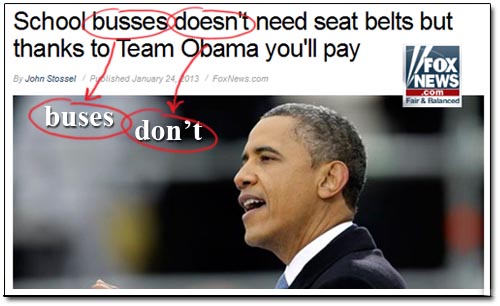 That’s an apt demonstration of how idiotic the right-wing is in their haste to condemn any government initiative, even those designed to protect kids. They derisively portray Team Obama as spending wastefully on seat belts, just as they cast Obama as a Stalinist gun-grabber when he proposes safety measures to reduce gruesome shootings.

[Update] Fox News has removed this article entirely from their web site. That seems like a drastic reaction to a couple of grammatical errors. Could they have realized that Stossel’s argument was idiotic? Nah … if that bothered them they’d have to take down 80% of their site.