The Reality-Challenged Case For Arming Everyone

The conservative congregation of gun worshipers is pulling out all the stops to prevent any dialogue on gun safety and common sense measures that might protect citizens from the sort of mass carnage that has shocked Americans recently in places like Newtown, Aurora, and Tuscon. With the help of right-wing media, notably Fox News, they are promulgating fear and hostility as a response to a political difference of opinion over how to make our communities safer. 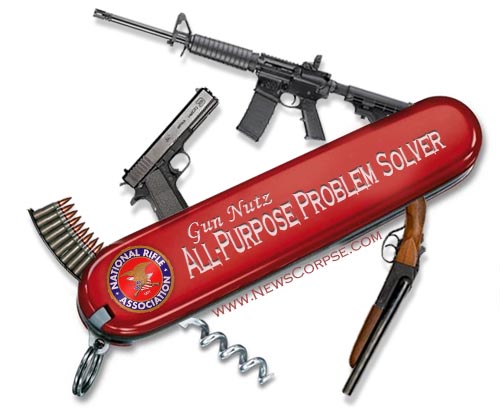 The mantra from the right is that Obama is a tyrant who will abolish the Constitution and confiscate all guns. While there is not even an inkling of evidence that any of that is true, the terrifying specter of a dictatorial slave state is flushing through the veins of pseudo-patriots who pretend to revere America and the soldiers who defend it, but are adamant that they retain sufficient firepower to massacre them if necessary. That’s how they thank our heroes for their service.

In the rhetorical battle to preserve their alleged right to carry weapons of carnage into schools and bars and laundromats and baseball stadiums, the Gunnies are now declaring that every threatened or oppressed group of people would have been better off if they had been armed to the hilt and prepared to blow away their assailants. Reality is at variance with these apocryphal claims, but that doesn’t lessen their feverish insistence that a fire-with-fire response to every conflict will bring about a peaceful, secure society. Despite the obvious contradiction in that view, conservative mouthpieces are expressing remarkably similar themes that arrive at the same conclusion: If [fill in the blank] had guns the good guys would always win and violence would become a thing of the past (er, like the wild west?). It’s a Fox Nation style argument that dispenses with truth in favor of hyperbole and historical revisionism. For instance…

If Civil Rights Activists Had Guns…

Rush Limbaugh: “If a lot of African-Americans back in the ’60s had guns and the legal right to use them for self-defense, you think they would have needed [to march at] Selma?”

This astonishingly blockheaded statement ignores the fact that the civil rights activists protesting segregation and discrimination in Selma, Alabama were devoted to peaceful change. They were led by Martin Luther King who was inspired by the non-violent methods practiced by Gandhi. It was a successful strategy that resulted in profound changes in both government and people’s hearts. In effect Limbaugh is expressing solidarity with the Black Panthers and suggesting that armed protesters shooting at southern sheriffs would have brought about a better result. However, the presence of guns would only have put everyone in greater danger, sapped the moral advantage of the protesters and produced more corpses all around. And Limbaugh would have been the first to condemn them for their reliance on violence.

If Slaves Had Guns…

Gun advocate Larry Ward: “If African Americans had been given the right to keep and bear arms from day one of the country’s founding, perhaps slavery might not have been a chapter in our history.”

Of course. If the slave traders had given each of their human “cargo” a musket along with their shackles they would have been able to kill off their prospective masters and enjoy life in the new world. I’m sure that Ward and the others propounding this theory would have been delighted to hear that armed slave rebellions had put folks like George Washington and Thomas Jefferson in their graves before they ever got around to declaring independence from the British. Furthermore, the unorganized, disoriented, involuntary African immigrants would have had no problem dispatching the southern slave states that a civil war with the rest of the nation struggled with for years at horrendous human cost.

If Jews Had Guns…

Judge Andrew P. Napolitano, Fox News: “If the Jews in the Warsaw ghetto had had the firepower and ammunition that the Nazis did, some of Poland might have stayed free and more persons would have survived the Holocaust.”

Once again, the dimwits on the right think that civilians of an oppressed minority would have managed to overcome a military power that held at bay most of the free world. Apparently Napolitano believes that the Jews in the Warsaw ghetto had some superpowers that, were they armed, would have made them a more ominous opponent than the Americans, the Russians, the English, and the French combined.

If Schools Had Guns…

Ann Coulter: “Only one policy has reduced these mass shootings and the number of casualties, and that is concealed carry permits. If you want to reduce the number of dead, and the number of times this is going to happen in an area, you sort of sense this, because they so often happen at public schools.”

Something that the Gunnies seem all to willing to excise from the debate is the fact that prior incidents of shootings at schools occurred despite there being armed guards present. That was the case at Columbine. It was also the case at Virginia Tech where they had a whole armed police squad on campus. Despite their best intentions, guards cannot be everywhere at once. And they also are often at a disadvantage when confronted by an assailant with a military style arsenal and bullet-proof gear who gets the jump on them.

If Teachers Had Guns…

Pat Robertson: “The truth is, if teachers had guns in classes, these shooters wouldn’t come in because they would be afraid of getting shot themselves.”

The truth is, that teachers are frequently the first victims of school shootings. The time it would take them to retrieve a weapon from a place that is safe enough for it to be stored in a classroom full of students would be plenty of time for an assailant with an AR-15 to riddle them with bullets. Robertson also forgets that most of these assaults are perpetrated by people who end up taking their own lives, so it is ridiculous to regard them as being afraid of getting shot themselves. And the presence of others with weapons certainly didn’t deter the shooter at the Ft. Hood Army base in Texas, where he certainly had reason to believe that there were other armed persons in the vicinity.

The speculative query as to whether there would have been a different outcome in any of these situations if [fill in the blank] had guns is just plain lunacy. It would be dubious under any circumstances to pretend to predict what might have occurred in these after-the-fact scenarios, but the specific examples chosen by these Gunnies demonstrate how blinded they are by their prejudices and violent, video game fantasies. The speculation could go on indefinitely. What if the women suffragettes had guns? What if the students at Kent State had guns?

What if Jesus and his disciples had guns? Pontius Pilate might have been riddled with armor-piercing bullets. There would have been no crucifixion. In fact, the soldiers and pharisees who arrested Jesus in the Garden of Gethsemane would have been slaughtered. It was there that Jesus admonished his disciple Peter, who took up his sword to defend him, saying “He who lives by the sword, dies by the sword.” That’s a lesson the sanctimonious gun evangelists still haven’t learned 2,000 years later.