Can anyone explain what the Fox Nationalists find so newsworthy about this? 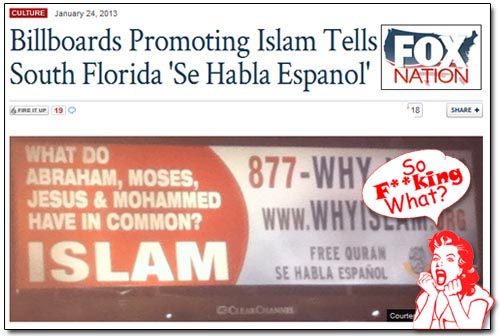 A billboard that gives information about where people can go to learn more about Islam doesn’t seem like something that would stir up much controversy. It isn’t espousing a point of view. It isn’t disparaging any other faith. It would only be of interest to people who have a desire for the information.

Nevertheless, Fox manages to fire up the panicky bigots who populate their web site by focusing on a small disclosure at the bottom of the billboard that simply says “Se Habla Espanol.”

It’s not enough that Fox News routinely maligns Muslims by associating them all with terrorism. Now they seem to be matching up their viewers fear of Muslims with their anxiety over Latinos, whom they regard universally as illegal aliens. It’s a Fox twofer. With a single news item they can whip up hysteria about Islamic terrorists sneaking into the country, taking our jobs, and blowing them up, all while refusing to learn our language. Ethnic and religious bigotry all rolled up into one posting about a conventional advertisement that has the audacity to address Spanish speakers in (of all places) south Florida.

3 thoughts on “So F**king What? Fox News Panics Over Spanish Speaking Muslims”